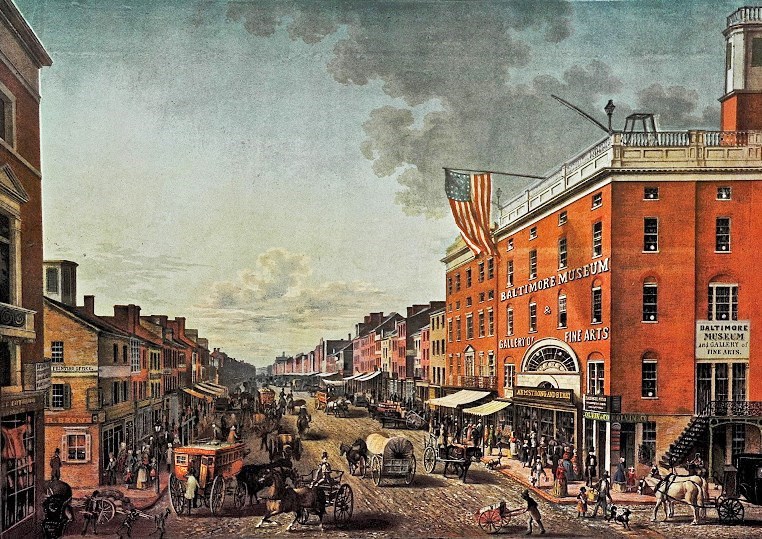 ON JULY 24, 1863, three weeks after the Battle of Gettysburg, Union officers freed the inmates of a slave trader's jail on Pratt Street near the Baltimore harbor. They found a grisly scene.

"In this place I found 26 men, 1 boy, 29 women and 3 infants," Col. William Birney of the U.S. Colored Troops wrote to his commanding officer. "Sixteen of the men were shackled and one had his legs chained together by ingeniously contrived locks connected by chains suspended to his waist."

The slaves were confined in sweltering cells or in the bricked-in yard of "Cam- liu's slave-pen," where "no tree or shrub grows" and "the mid-day sun pours down its scorching rays," Birney wrote. Among those imprisoned was a 4-month-old born in the jail and a 24-month-old who had spent all but the first month of his life behind bars.

The liberation of the slave jails marked the end of a brutal Baltimore institution whose story remains unknown except to a handful of local historians.

For a half-century before the Civil War, more than a dozen slave traders operated from harborside storefronts along Pratt and adjacent streets. Some advertised regularly in The Sun and other papers, declaring "5,000 Negroes Wanted" or "Negroes! Negroes! Negroes!" In an 1845 city directory, "Slave Dealers" are listed between "Silversmiths" and "Soap."

Out-of-town dealers would routinely stop for a week at Barnum's or another downtown hotel and place newspaper advertisements declaring their desire to buy slaves.

A routine spectacle was the dreary procession of black men, women and children in chains along Pratt Street to Fells Point, where ships waited to carry them south to New Orleans for auction. Weeping family members would follow their loved ones along the route; they knew their parting might be forever, as there would be no way to know where slaves shipped south would end up.

The grim drama in Baltimore was part of a major industry. Though the United States banned the import of slaves in 1808, the domestic slave trade thrived, as the need for labor shrank in the Chesapeake area and boomed in the Deep South, where the cotton gin had revolutionized agriculture. Between 1790 and 1859, according to one scholar's estimate, more than 1 million slaves were "sold south," most of them from Virginia and Maryland.

The broken families and severed relationships resulting from this commerce were a human catastrophe that can be compared in scale, if not in violence or death toll, to the original tragedy of the Middle Passage. Scholars estimate that perhaps 11 million captured Africans survived the journey to the Americas, but most went to Brazil and the Caribbean; only about 650,000 came to the colonies that would become the United States.

Yet the story of the domestic slave trade has been swallowed in America's long amnesia about slavery in general.

"A dream of mine would be to have a little Baltimore tour -- not showing where Frederick Douglass worked in Fells Point or where Thurgood Marshall lived, but where the slave traders were, where the slaves were whipped," says Ralph Clayton, a librarian at the central Pratt library and a historian who has authored most of the few works on the city's slave trade. "But I've run into many people of both races who say, 'Why are you digging this up? Leave it alone.'"

Agnes Kane Callum, dean of Maryland's African-American genealogists, remembers seeing a still-standing slave jail as a girl in the 1930s. Her father would take the family on Sunday drives and point out a hulking brick building with barred windows at Pratt and Howard streets.

"He called it a slave pen," recalls Callum, 74, a North Baltimore grandmother who has researched slavery for 30 years. "He'd say, 'That was where my grandmother was held.'" The slave dealer sold Callum's great-grandmother, who had been snatched as a girl from a beach in the Cape Verde Islands off West Africa, to a plantation in St. Mary's County.

Camliu's and all the other physical evidence of Baltimore's once-thriving slave trade has been erased by demolition and redevelopment. But its history can be pieced together from surviving documents.

The slave jails served several purposes. Slave owners leaving for a trip could check their slaves into a jail to ensure they would not flee. Travelers stopping in Baltimore could lock up their slaves overnight while they slept at a nearby inn. Unwanted slaves or those considered unreliable because of runaway attempts could be sold and housed at the jail until a ship was ready to take them south, usually to New Orleans.

The slave ships anchored off Fells Point, which the traders' generally preferred because of fear of interference from the large number of free blacks working at the Inner Harbor, says Clayton. He has researched the story of an Amistad-style rebellion by slaves on one ship, the Decatur, southbound from Baltimore. The Sun carried ads for the ships' regular runs from Baltimore to New Orleans.

By the Civil War, while slaves outnumbered free blacks in Maryland, in Baltimore there were 10 free people of color for every slave. Yet the slave trade posed a constant threat to free African-Americans, who were in danger of being kidnapped and sold into slavery.

In fact, the warden of the Baltimore County jail ran regular newspaper notices listing black men and women he had arrested on suspicion of being runaways but who claimed to be free. Each notice would include a detailed description and the admonition, "The owner of the above described negro man is requested to come forward, prove property, pay charges and take him away, otherwise he will be discharged according to law."

In The Sun in 1838, Hope H. Slatter, a Georgia-born trader who succeeded Woolfolk as Baltimore's leading trafficker in human beings, announced under the heading "Cash for Negroes" the opening of a private jail at Pratt and Howard, "not surpassed by any establishment of the kind in the United States." Slatter offered to house and feed slaves there for 25 cents a day, declaring: "I hold myself bound to make good all jail breaking or escapes from my establishment."

To keep the supply flowing, Slatter added: "Cash and the highest prices will at all times be given for likely slaves of both sexes. ... Persons having such property to dispose of, would do well to see me before they sell, as I am always purchasing for the New Orleans market."

Facing complaints about the grim procession of chained human beings along Pratt Street, Slatter found a solution of sorts: He hired newfangled, horse-drawn "omnibuses" to move the slaves to the Fells Point docks. He would follow on horseback.

"The trader's heart was callous to the wailings of the anguished mother for her child. He heeded not the sobs of the young wife for her husband," wrote one abolitionist eyewitness whose account was discovered by Clayton.

"I saw a mother whose very frame was convulsed with anguish for her first born, a girl of 18, who had been sold to this dealer and was among the number then shipped. I saw a young man who kept pace with the carriages, that he might catch one more glimpse of a dear friend, before she was torn forever from his sight. As she saw him, she burst into a flood of tears, sorrowing most of all that they should see each other's faces no more," the abolitionist wrote.

Rogers' mother was particularly distraught, the flier said, because she had lost another daughter in the same manner four years earlier, "of whom she has never since heard." Rogers' stepfather, a free man, had offered to bind himself to service to work off the $850 necessary to buy her freedom. But the slave trader was unwilling to wait, so the preacher, identified as S. Guiteau, was trying to raise the necessary sum.

"Let mothers and daughters imagine the case their own," Guiteau wrote, "and they cannot but act with promptness."

Why have such spellbinding stories so rarely been told? Callum, the Baltimore genealogist, attributes it to the reluctance of both races to reopen the wound left by slavery.

"White people naturally don't want anyone to know their ancestors owned slaves," Callum says. But black people, too, have kept silent, she says. Callum's maternal grandfather was born into slavery, but when the subject arose, the old man would declare, "No man owned me!"

"His voice was so full of emotion, a hush would fall over the room," Callum recalls, sitting in her North Baltimore rowhouse surrounded by the tools of the genealogical trade.

"Some black people still feel that way today, six generations later," she says. "But we cannot let people forget our holocaust, the black holocaust of slavery."
Posted by Barbara Wells Sarudy at 4:00 AM