This recipe from the April 1883 edition of Godey’s Lady’s Book published in Philadelphia, uses gelatin alongside natural colorings and flavorings to produce jewel-like egg shaped treats in four colors instead of a simple boiled egg with a painted shell. 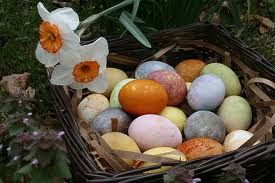 Soak in a bowl a one-ounce package of gelatine for four hours with a pint of cold water; when thoroughly dissolved add to it a quarter of a pound of white sugar and three-quarters of a pint of boiling milk; stir over the fire until well mixed.

Strain and divide into four parts.

Into another part stir in two large tablespoonfuls of grated chocolate, previously well dissolved, and made into a smooth paste.

Into another stir the beaten yolks only of two eggs.

Into the fourth part put enough cochineal to make it a bright red color.

The chocolate mixture should be flavored with vanilla, the yellow with lemon, the white with rosewater, and the red with some bitter almonds, boiled in a piece of muslin.

The yellow portion should be heated long enough over the fire to cook the egg.

Rinse out twelve egg shells, which should have been very carefully broken at the end so as to leave the shape of the egg as perfect as possible.

Fill the egg shells with the various mixtures, and set them upright in a shallow pan of flour, to keep them steady, and leave them until the next day.

Make some nice clear wine jelly, and lay it in a glass dish, broken into sparkling pieces; break away the shells very carefully, and arrange the colored eggs alternately on the bed of jelly.

This is a very economical dish, and is always much liked.
Posted by Barbara Wells Sarudy at 4:00 AM