1892 A Change in Women's Dress & Freedoms - Contemporaries both Hostile & Confused 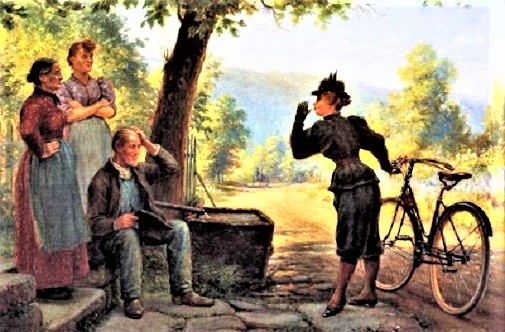 Edward Lamson Henry (American Painter, 1841-1919) The New Woman 1892. Edward Lamson Henry (1841–1919) was an American genre painter born in Charleston, South Carolina who came to live in New York at an early age.
In England - The Rational Dress Society & Victorian Dress Reform
Posted on September 21, 2021 by Jenny Ashcraft
In 1881, a group of high society women gathered in London to form a new organization. They named their group the Rational Dress Society, intending to reform Victorian women’s dress. The group came up with criteria for the perfect dress. It included:
Freedom of Movement
Absence of pressure over any part of the body
No more weight than is necessary for warmth, & both weight & warmth evenly distributed.
Grace & beauty combined with comfort & convenience
Not departing too conspicuously from the ordinary dress of the time
Their ideas were revolutionary & controversial. Typical Victorian dress styles incorporated heavy fabrics, tight corsets, bustles, hoop skirts, & extravagant ornamentation. The women argued that dress reform would allow them to participate in activities like cycling. Bicycles had become a symbol of freedom for many women who found the sport liberating & emancipating.
A founding member of the society was Viscountess Florence Wallace Pomeroy, also known as Lady Harberton. Lady Harberton, the daughter of wealthy landowners, married James S. Pomeroy. He later became the 6th Viscount Harberton. In 1880, Lady Harberton took up the cause of dress reform. She loved to cycle, but heavy, long skirts prevented her from enjoying the activity. She championed the reformed dress, which consisted of baggy pantaloons worn underneath a knee-length skirt. She also invented the divided skirt, which initially evoked jeers on both sides of the pond. Some feared that trifling with a traditional women’s dress was a step down a path to loosening moral values.
In 1883, the Rational Dress Society sponsored an exhibition held in London. The exhibit included shorter dresses, divided skirts, “costumes for climbing for lady mountaineers, & a costume for walking.” One man reported to The Times that the women in his family discarded their corsets & found new freedom in dancing, walking, tricycling, lawn tennis, & other open-air exercises. They vowed never to return to corsets & heavy skirts. Attitudes for many women (and men) were undergoing a seismic shift. The “woman of the future” wanted freedom in her clothing – & freedom within other aspects of her life.
The struggle for rational dress came to a head after an incident in 1898. Lady Harberton went cycling in Surrey. She stopped for lunch at the Hautboy Hotel but was turned away for improper dress. Lady Harberton sued the hotel but lost the case because the hotel had offered alternative seating in the bar. Nevertheless, the case brought attention to rational dress & a victory for women who advocated for it. Lady Harberton spent decades promoting clothing that would make life easier for women. Later in her life, she also became an advocate for the women’s suffrage movement. Lady Harberton died in 1911. The Guardian eulogized her as an “enthusiastic & undaunted advocate” for dress reform.
Posted by Barbara Wells Sarudy at 4:00 AM