Anna Ella, the daughter of Thomas King Carroll of Kingston Hall, Somerset County, Maryland, was born on Aug. 29, 1815. Her early education was not received through formal schooling but from her parents. Because of this she grew up in a world of business and politics, for her father's library was far above the average, befitting a man who was to become governor of the state. She received a better background in law and politics from her father than most men did in training for the bar. 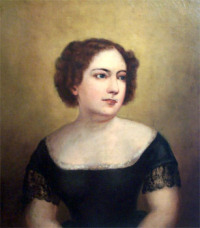 The Carrolls of Kingston Hall, like so many other plantation owners of the period, were yearly becoming increasingly land and slave poor. The point was reached where they were unable to maintain all their slave and land holdings. The price of tobacco on the Eastern Shore was no longer a reliable source of income. Many of the surplus slaves could have been sold to...toil in the cotton fields of the deep south, but the Carrolls viewed such a move as a horrible fate. Miss Carroll personally was caught in a trap; she was a member of a slave-holding family but at the same time working with the American Colonization Society for the gradual freeing of the slaves. She once mortgaged her own salary to prevent the sale of some of her slaves to the cotton fields. She also helped to finance the family by the establishment of a girls' school at Kingston Hall.

Finally the economic pressure was too great and many of the Carroll slaves were turned over to neighbors, who they knew would give them a good home. Kingston Hall was sold and Thomas King Carroll bought and moved to Warwick Fort Manor on the Choptank River, near Cambridge.

Anna Ella Carroll...had turned to a career as a writer. Because of her cultured background and training, along with a talent for writing, she soon became a success. Among her early work in this field was her endeavor to promote the interest of building railroads, especially a transcontinental line connecting the Atlantic and Pacific Oceans. Jefferson Davis even asked her to study and write about the Memphis-Charleston Railroad, a project which helped her later during the Civil War to realize the significance of transportation to the Southern cause. While writing and keeping records for the Whig Party in the 1850's, through the influence of Henry Clay, certain papers fell into her hands concerning plans for Southern secession. Miss Carroll kept these papers and made good use of them for the Union cause against the Southerner, John C. Breckenridge, in the 1860's.

Anna Ella Carroll wrote many articles for the newspapers, among which were the New York Express and the National Intelligencer. She made many friends among the United States Navy when she wrote in their defense in 1855, when a reorganization of the Navy was in progress. In writing articles about political corruption at the polls, her work, "The American Battle," made her a political celebrity.

Miss Carroll showed very little faith in the ability of Lincoln both during the election of 1860 and even after he had won the office of President; but being a great patriot she was determined to give this Republican her support. All during the war she wrote in defense of the Union and President Lincoln. Her attack on the secession speech of Sen. Breckenridge was published and circulated by the War Department. It is also said that she was a major influence in helping Gov. Hicks of Maryland keep the state officially in the Union.

When President Lincoln personally called for her services she did not fail him. At his request she wrote "The Relation of Revolted Citizens to the National Government," upon which Lincoln based some of his later actions. Just before this she had written a very powerful pamphlet entitled, "The War Powers of the Government."

Probably the most interesting and significant of her assignment is dealt with a problem of strategy. The course of the war in the West, the Mississippi Basin, was vital to the Union plan of victory. Because she had relatives in St. Louis, but more important because she had the talents for such an undertaking, Miss Carroll was sent to study that region. As a result of her observations and studies, she suggested that the Union plan of attack be the Tennessee River instead of the proposed Mississippi Expedition.

The War Department saw the significance of this strategy and the Tennessee River became the point of attack. The capture of Forts Henry and Donelson, under this plan, by General U. S. Grant were major factors in breaking the Confederate fortifications, ending in the fall of Vicksburg. The success of this plan meant that the Confederate system of communication was destroyed between the East and West. It is said that Miss Carroll offered a plan for the capture of Vicksburg which was very similar to the one General Grant used to achieve victory.

Lincoln and other prominent men during the war knew of her great services but felt for political and military reasons she would have to forego public recognition. Seemingly, it was understood that later Lincoln would make public her work in saving the Union; but Lincoln's untimely death prevented such action. For years after the Civil War some American leaders worked hard to have her recognized as the "mother" of the Tennessee Plan, and to see her paid for her services. Many years later Congress did give official recognition and also voted her a monthly pension of $50.

In 1891 Miss S. E. Blacknall wrote the first volume of a biography of Miss Carroll, which was just two years before her death, Feb. 19, 1893. Miss Carroll died in Washington, D.C., where she had been living for some time, but she is buried in the Old Trinity Graveyard beside her father, mother, and other members of her family. On the slab which has recently been placed to honor her we find these words: "Maryland's Most Distinguished Lady. A Great humanitarian and close friend of Abraham Lincoln. She conceived the successful Tennessee Campaign and guided the President on his constitutional war powers."

Lincoln's Secretary of War, Edwin M. Stanton, said, "Her course was the most remarkable in the war. She got no pay and did the great work that made others famous." 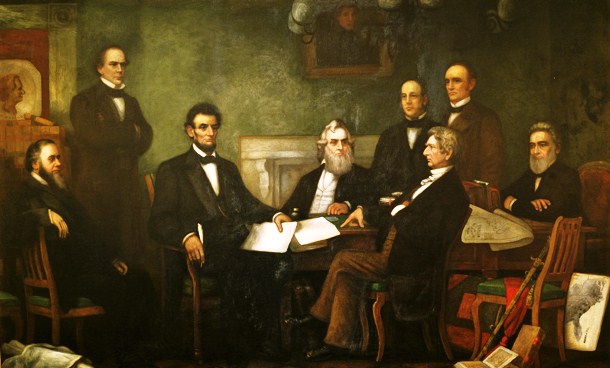 Francis Bicknell Carpenter’s painting, entitled “The First Reading of the Emancipation Proclamation Before the Cabinet,”

Anna's role as a military strategist during the Civil War was controversial. President Lincoln sent her, accompanied by an army officer, to observe and report on the War on the western front. Her reports resulted in major military strategies that eventually doomed the Confederacy and ended the intervention of the European nations on the behalf of the South. The President and his Cabinet kept her authorship a secret, however; the public was not to know that the Union plans were devised by not only a civilian, but by a woman.

Anna continued to advise the federal government and write Union propaganda throughout the War. After President Lincoln's assassination, she devoted her efforts to reconstruction. However, Anna was largely ignored during those early reconstruction years. She appealed to Congress for recognition and compensation for her contributions to the War effort. Eventually, indirect recognition came in Francis B. Carpenter's 1864 painting of “The First Reading of the Emancipation Proclamation Before the Cabinet.” The picture shows an empty chair with a folder of maps and notes similar to those Anna had carried. It is believed that this was a way of acknowledging the "unrecognized member of the Cabinet."

In 1881, a bill was finally introduced in Congress to grant recognition and pension to Anna. The compensation was to be at a rate given to major generals. Unfortunately, President Garfield was assassinated while the bill was under consideration, and House Bill 7256 mysteriously disappeared. Instead, Congress passed a bill to put Anna’s name on the pension rolls and to pay her $50 a month for life for the "important military service rendered by her during the late Civil War."

Even though she was an invalid in her old age, Anna continued to write. When the leaders of the Women's Suffrage Movement learned of her story, they attracted attention to her plight, claiming that such an injustice would not have happened if women were allowed to vote. Anna Ella Carroll died on February 19, 1894. And, of course, women did not get the right to vote in national elections in the United States until 1920.
Posted by Barbara Wells Sarudy at 4:00 AM