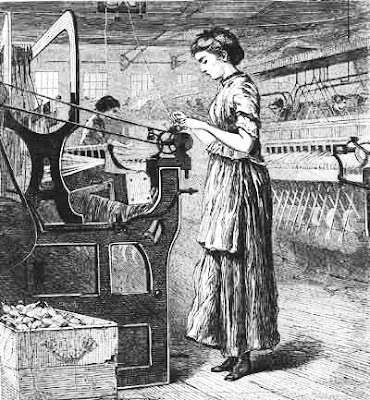 In 1775, the American Manufactory at Philadelphia, Pennsylvania, introduced into the British America colonies the spinning jenny, a machine for spinning thread. After the Revolution & as the Early Republic gained interest in producing goods for trade, in 1814, a Waltham, Massachusetts, factory became the 1st American site with a power loom for the mechanized weaving of cloth. During the 1800s, textile manufacture became the largest American industry, employing millions of people, mostly women & children.

"On the 12th of October, we made an expedition from Boston to the largest manufacturing establishment in New England, or, I suppose, in America, at Lowell, on the banks of the Merrimack. This river had been allowed to dash unheeded over the Falls in that neighbourhood, from all time, until the recent war gave a new direction to industry, and diverted capital heretofore employed in commerce or in agriculture, into the channel of manufactures. A few years ago, the spot which we now saw covered with huge cotton mills, smiling villages, canals, roads, and bridges, was a mere wilderness, and, if not quite solitary, was inhabited only by painted savages...

"The stuffs manufactured at Lowell, mostly of a coarse description, are woven entirely by power looms, and are intended, I was told, chiefly for home consumption. Every thing is paid for by the piece, but the people work only from daylight to dark, having half an hour to breakfast and as long for dinner.

"The whole discipline, ventilation, and other arrangements, appeared to be excellent; of which the best proof was the healthy and cheerful look of the girls, all of whom, by the way, were trigged out with much neatness and simplicity, and wore high tortoise-shell combs at the back of their heads.

"I was glad to learn that the most exemplary purity of conduct existed universally amongst these merry damsels—a class of persons not always, it is said, in some other countries, the best patterns of moral excellence. The state of society, indeed, readily explains this superiority: in a country where the means of obtaining a livelihood are so easy, every girl who behaves well is so sure of being soon married. 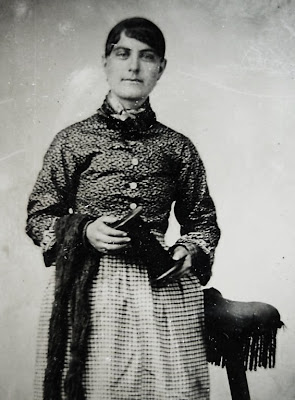 "In this expectation, they all contrive, it seems, to save a considerable portion of their wages; and the moment the favoured swain has attained the rank of earning a dollar a-day, the couple are proclaimed in church next Sunday, to a certainty. The fortune, such as it is, thus comes with the bride; at least she brings enough to buy the clothes, furniture, and the other necessaries of an outfit.

"Generally, however, these good folks, as well as many of the more wealthy class of the community, do not think of setting up an establishment of their own at first, but live at boardinghouses. This apparently comfortless mode of life, is undoubtedly far the most economical; besides which, it saves the mistress of the family from the wear and tear of domestic drudgery, always unavoidably great in a country where menial service is held to be disgraceful.

"What happens when a parcel of youngsters make their appearance I forgot to enquire; but before that comes about to any great extent, the parties have probably risen in the world; —for every thing in America relating to population, seems to be carried irresistibly forward by a spring-tide of certain prosperity. There is plenty of room—plenty of food—and plenty of employment ; so that, by the exercise of a moderate share of diligence, the young couple may swell their establishment to any extent they please, without those doubts and fears, those anxious misgivings, which attend the setting out of children in older and more thickly peopled countries...

"On the 13th October, at six o'clock in the morning, I was awakened by the bell which tolled the people to their work, and on looking from the window, saw the whole space between the ' Factories' and the village speckled over with girls, nicely dressed, and glittering with bright shawls and showy-coloured gowns, and gay bonnets, all streaming along to their business, with an air of lightness, and an elasticity of step, implying an obvious desire to get to their work."