Although John Tyler's (1790-1862) decision to annex Texas led to the violent Mexican-American War, Tyler had a sensitive side as well. After his first wife died early in his presidency, he courted the much younger Julia Gardener (1820-1889). In a poem he wrote for her, he contemplated giving love a second chance:

"Shall I again that Harp unstring,
Which long hath been a useless thing,
Unheard in Lady's bower?" 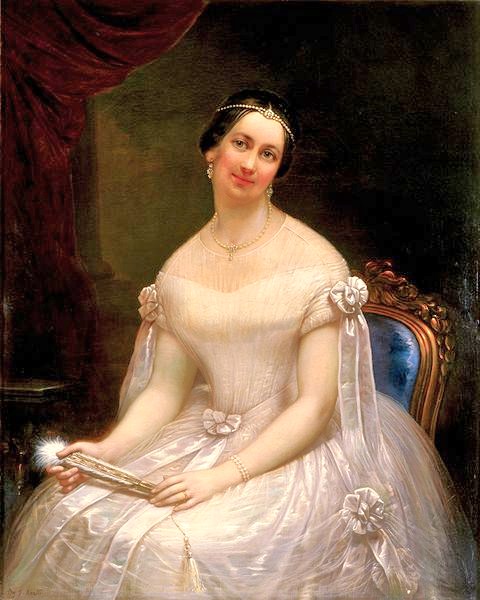 President Tyler's first wife Letitia Christian Tyler (1790-1842) died in the fall of 1842. Julia Gardiner had met President Tyler in January of 1842. In the spring of 1843, the widowed Tyler saw Julia again at a card party at the White House. He was smitten by the young beauty, nearly 30 years his junior. He asked her to marry him within weeks, but she didn't immediately agree.

In February of 1844, both were on a new steam frigate, when a huge naval gun exploded, killing a number of people, including Julia's father. This shared trauma seemed to draw them together. The next June, Julia married John Tyler in a secret ceremony in her home state of New York. 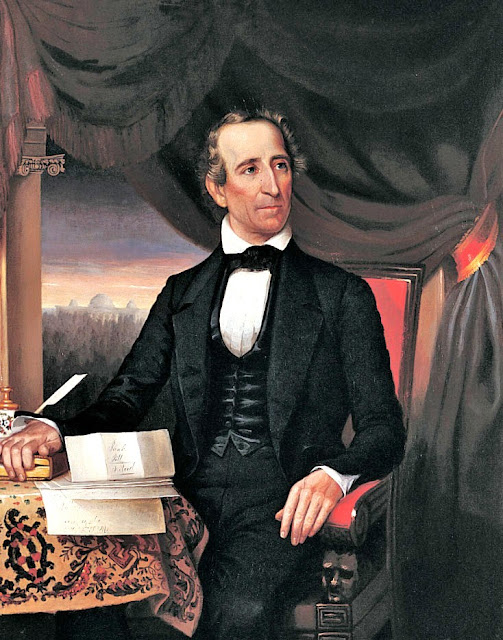 The 24-year-old stepped into the role of First Lady with vigor & became a new kind of First Lady. She was the 1st to pose for a daguerreotype; to hire a press agent; to dance at a White House party; and to be constantly accompanied by 12 "maids of honor," six on each side, all dressed alike.

John Tyler only served 1 term, so Julia's tenure as First Lady was over in a few months. The couple returned to Virginia, & had 7 children to expand Tyler's original family of 8 children.