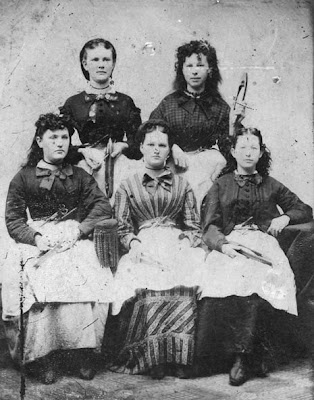 Tintype. University of Massachusettes at Lowell


American poet Lucy Larcom (1824-1893) was the ninth of ten children. Her sea captain father died when she was very young. When she was 11 years old, her family moved to Lowell, Massachusetts, where her mother got a job as superintendent of a female dormitory at the local textile mill. Lucy herself worked in the mills for 10 years.

The carding room, with its great groaning wheels,
Its earthquake rumblings, and its mingled smells
Of oily suffocation;
Long clean alleys, where the spinners paced
Silently up and down, and pieced their threads,
The spindles buzzing like then thousand bees.
The Long threads were wound from beam to beam,
And glazed, and then fanned dry in breathless heat.
Here lithe forms reached across wide webs, or stooped
To disentangle broken threads, or climbed
To where their countenances glistened pale
Among swift belts and pulleys.
The door, swung in on iron hinges, showed
A hundred girls who hurried to and fro,
With hands and eyes following the shuttle’s flight,
Threading it, watching for the scarlet mark
That came up in the web, to show how fast
Their work was speeding. Clatter went the looms,
Click-clack the shuttles. Gossamer motes
Thickened the sunbeams into golden bars,
And in a misty maze those girlish forms,
Arms, hands, and heads, moved with the moving looms,
That closed them in as if all were one shape,
One motion. 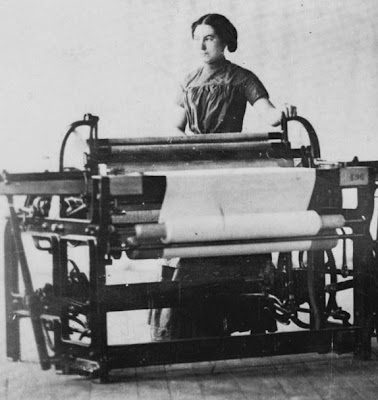