By 1914. the art of the laundry had become a subject taught in one of  America's finest universities.  Laundering written by Lydia Ray Balderston, who was an Instructor of Laundering, Teachers College, Columbia University, New York City, was included in the series Lippencott's Home Manuals. 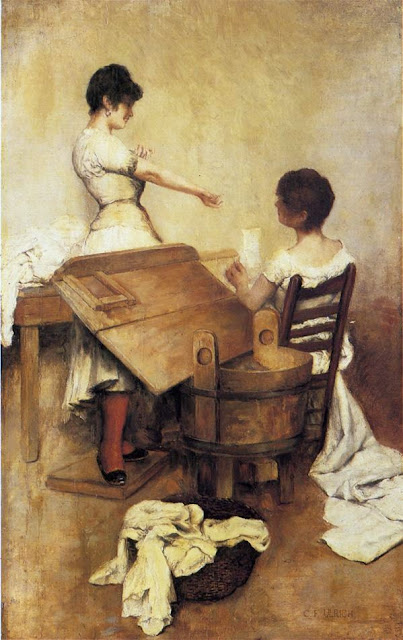 
"The earliest known method of washing depended entirely on the action of the running water of streams. If the water was not running, the primitive peoples quite naturally used twisting, shaking, flopping, slapping and pounding. They were dependent on the solvent power of water for many kinds of soil, but if any stain was not soluble in water, there was no way to take it out. We find it stated that in B. C. 2000 Egyptians on the Nile stamped their clothes with the feet, beat them with white clay, and wrung them by twisting and turning, one end being held between the feet. Homer in the "Odyssey" tells of the early wash days in Greece."  Laundering written by Lydia Ray Balderston in 1914


"The story is told that a collar in London in 1832 drew attention to the question of sterilizing the clothes; as a result a poor woman set up a wash-boiler, soap kettle, and other appliances, and so we have the first public wash-house. Here washwomen paid a penny for the privilege of its use, and in 1842 a public laundry was established in Liverpool."  Laundering written by Lydia Ray Balderston in 1914 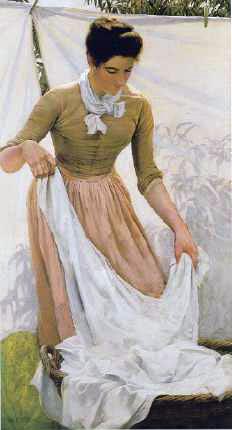 
"Sunshine is the simplest method of bleaching and is also the safest. To bleach with sunshine, the garment should be washed clean, then spread while wet in the sun. The sun, together with the oxygen of the water, is most effective in its work. This method requires the least knowledge and the most-time, but no destruction of fiber results. Often the garments are spread in the dew. This dew takes the place of sprinkling the clothes. With either process we are dependent upon the oxygen supplied by the moisture."  Laundering written by Lydia Ray Balderston in 1914 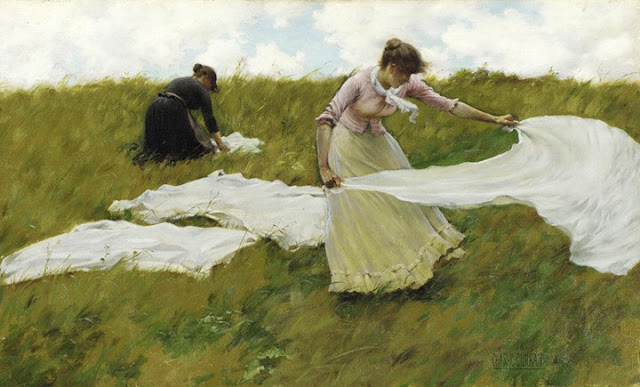 
"A washing solution must be established to suit different kinds of water. Some of the hard waters will require more soda in the soap solution than others. The water should be measured, the soap weighed, and the two heated at a low temperature in the soap tank until all soap is dissolved and the liquor is amber color. The weighed quantity of soda is sprinkled in, and the solution simmered another ten minutes. For a general idea of proportion one may use, if water is hard:   5 lbs. of soap. 10 lbs. of soda. 25 gallons of water."  Laundering written by Lydia Ray Balderston in 1914


"Water has solvent power. The early laundress washed her clothes in the running brook and the water dissolved out the dirt. To hasten its work the laundress often pounded the clothes with a paddle or stone or trod them. This process was slow, and as time became a consideration it seemed wise to find some cleansing agent that would add its power to that of the water.  The alkaline nature of urine was learned, and it was the custom to have urine collected in large urns in central places in the village. This became the public source of supply for the first chemical aid in washing. Even in our mother's early memory urine was used in dyeing the yarn."  Laundering written by Lydia Ray Balderston in 1914 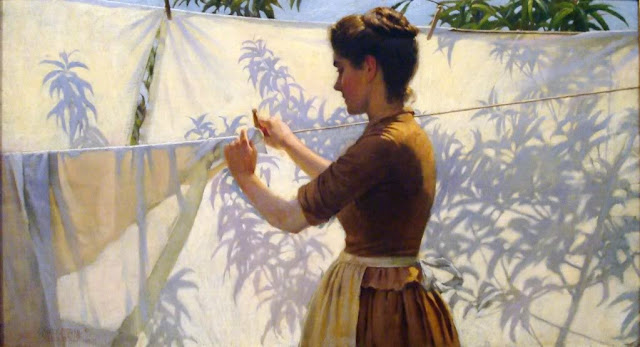 
"Later wood ashes were taken from the housewife's fire, covered with water and the pearlash or potash was dissolved—"leached." The clothes were soaked in this, and the pearl-ash or lye aided in the cleaning process, but it was destructive to the clothing. An illustration of this method is found in the Italian caldron, where the clothes are placed, the finest in the center, covered with canvas, ashes placed on top and water poured over.  To deaden the potash, later it was mixed with kitchen grease, thus making a kind of soap. This soap was of irregular composition, with the potash usually in excess. This potash "broke" the hardness of the water, and the suds acted as a carrier of dirt, thus making a double cleansing agent."  Laundering written by Lydia Ray Balderston in 1914 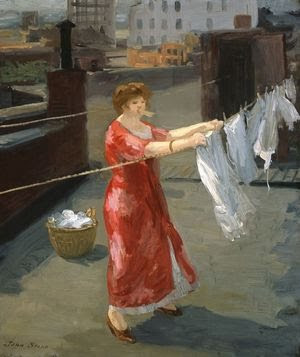 
"Finally in this present period (1914), in the domestic laundry, wash-boards and other primitive equipment are giving way to the various mechanical devices which are great labor savers, and time savers, and often indeed fabric savers. Washing machines driven by motors, special washing devices for clothes, boilers and wash-tubs, wringers (even motor driven), and steam drying rooms, are making the work less of a drudgery.  Even the irons are no longer heated with smoking hot coals and dragged over the garment, but by gas or electricity giving off heat with evenness of temperature and continued action."  Laundering written by Lydia Ray Balderston in 1914 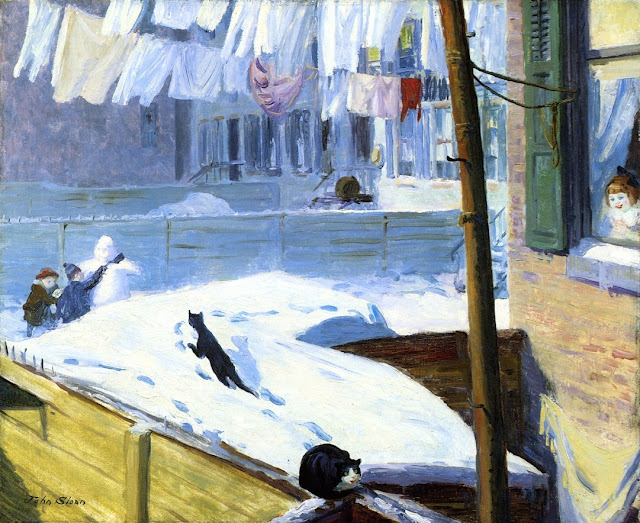 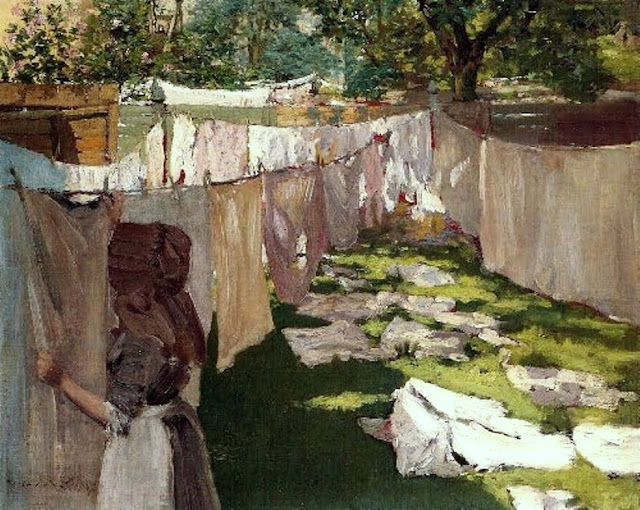 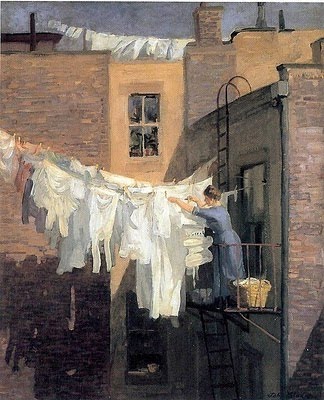 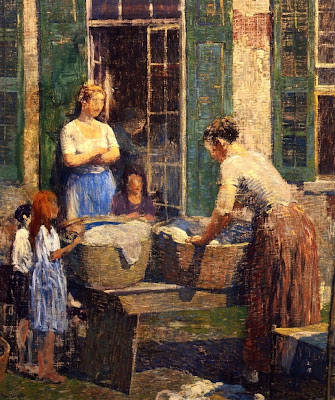 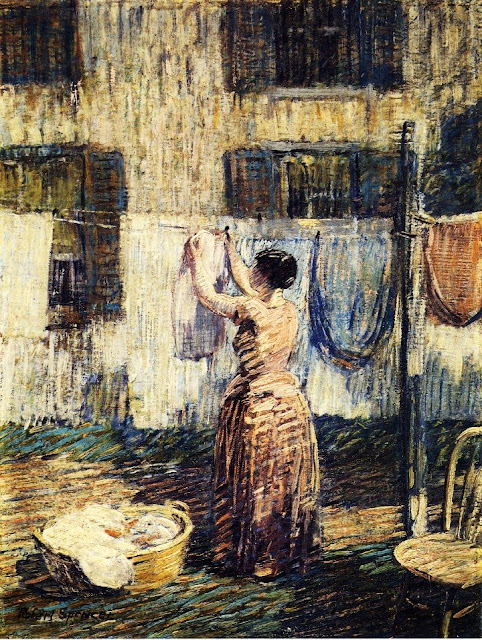 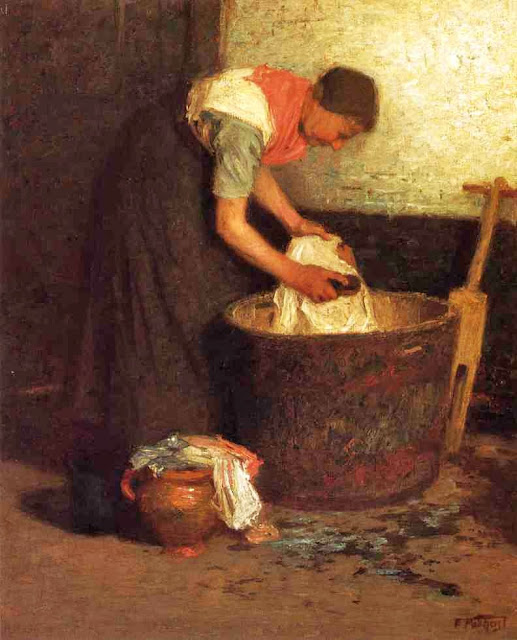 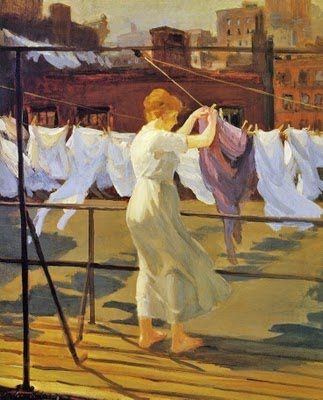 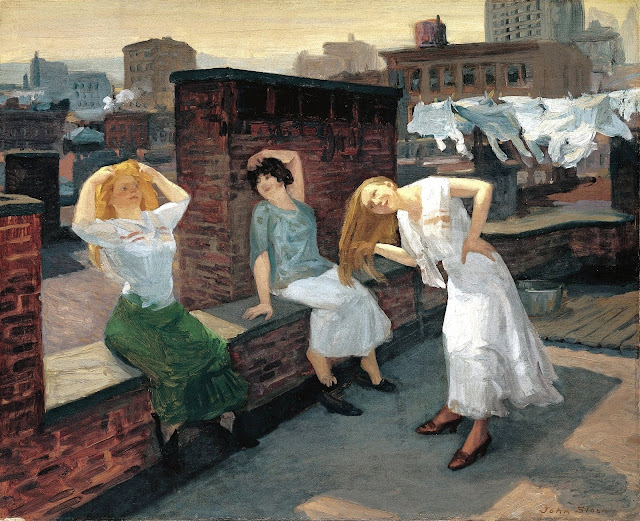 Email ThisBlogThis!Share to TwitterShare to FacebookShare to Pinterest
Labels: 19C, A Chase, A Curran, A Klumpke, A Potthast, A Sloan, A Spencer-LM, A Spencer-R, A Ulrich, A Walker-WA, A Walter, Laundry, US Art
Newer Post Older Post Home