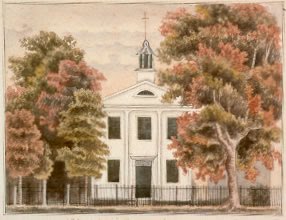 The Litchfield Female Academy in Connecticut

Catherine Cebra Webb was born at 84 Beekman Street, New York City, January 25, 1801. She was the daughter of Orange Webb, a shipping merchant of the firm of Webb and Lamb at the corner Pearl Street and Burlington Slip, and ruling elder in the Old Brick Church and Elizabeth Cebra daughter of Mr. James Cebra, of the Custom House.

Catherine Cebra Webb entered Miss Pierce's school in the summer of 1815, and boarded at first in the family of Lyman Beecher, until Mrs. Beecher's death, and then with the Misses Edwards on North Street, nearly opposite the school. Catherine remained only a few months in Litchfield, — the climate proving too severe for her.

On July 20, 1818, she married Mr. Rensselaer Havens, a shipping merchant of the firm of Perkins and Havens, 198 Front Street, New York City, and ruling elder in the Old Brick Church for 30 years. Mrs. Catherine Cebra Webb Havens had 8 children, 19 grandchildren, and 24 great-grandchildren. She has lived since 1873 in Stamford, Connecticut, until her 96th year.

Frances Maria Webb, an older sister of Catherine Cebra Webb, also attended Miss Pierce's school about 1810 or 1811, and met there Alexander Garden Fraser, of Beaufort, South Carolina, a student in Judge Gould's Law School. Frances M. Webb was born June 5, 1796, and married Alexander G. Fraser, June 5, 1812. Frances M. Webb Fraser had 4 children and died in Edinburgh, August 5, 1847.
Catherine Cebra Webb wrote:
I left New York, Wednesday, July lst, 1816, for Litchfield, to enter Miss Pierce's school. I took a steamboat to New Haven, and went by stage from there to Litchfield. The Rev. Mr. Stockton, a friend of my Father's, took me up.

I went to board in the family of Dr Lyman Beecher but stayed there only three weeks, as his wife was so ill they could not have the care of boarders. Miss Catherine Beecher and a Miss Burr, presided over the family. Dr Beecher had a room in the attic for his Study. I had a room with two Misses Wakeman, who were also pupils at Miss Pierce's school. Catherine Beecher had to send a report every Saturday of the conduct of the young ladies in her family, to Miss Pierce.

When Mrs. Beecher's illness obliged me to leave there, they got another boarding place for me across the street, with the Misses Edwards — two sisters — Miss Nancy and Miss Betsey.

They were very religious women; and as the Sabbath began then at sunset on Saturday, we had to hurry to get our letters from the postoffice, and be back before the sun went down. After supper, the Sabbath began with religious exercises — reading of the Bible and prayer—Sunday we all went to Dr Beecher's church. On one occasion, some of Judge Gould's law students were talking during the sermon, when Dr Beecher paused, and looking at the square pew at the right of the pulpit, (where Judge Gould's pupils sat) said, "I will suspend my remarks until those young gentlemen have finished their conversation."

There were no Sunday schools in those days. On returning from church, all we had for our dinner was a piece of pie and a mug of milk, as the Misses Edwards considered it wrong to cook on Sunday. We went to an afternoon service, then had a simple tea, and when the sun went down Sunday was over; but we had prayers and went to bed.

School began at nine o'clock, and closed at noon for an hour's recess, when we went home for our dinner and came back; but I cannot remember how long it kept in the afternoon — whether it was three or four o'clock —

Miss Waite taught me music, and I went into the back parlor of Miss Pierce's residence, to take my lesson on the piano. I remember "The Battle of Wagram" was one of my pieces. I had a very handsome paint-box which my father had imported from England for me, and I took drawing lessons at Miss Pierce's, but I cannot recall the teacher's name.

I did not stay long at Litchfield, as I was a delicate girl, and it was so very cold my Mother was afraid to have me stay. I came home in the Autumn, I remember when Dr Beecher's wife died. Her name was Koxana Foote; and I heard Dr Beecher preach her funeral sermon, standing in the little tub pulpit, while her coffin stood below it .

Miss Pierce had a nephew, John Pierce Brace, who lived, I think, next door to Miss Pierce's, and he taught every day in the school.

Miss Mary Pierce did not teach; only Miss Sarah, She was of medium height, rather fine-looking and dignified, and very religious. We had school every day; only, it seems to me that on Wednesday and Saturday we had a half-holiday.

Among the pupils was a Miss Catherine L. Webb, from Cooperstown, (sister of James Watson Webb) — two Misses Farnham from Massachusetts — Miss Phebe Conklin from Poughkeepsie — two Misses Sanford from Jamestown (N. Y.) — and Miss Emmeline Beebe from Connecticut . (She was the one who told Miss Pierce she could not study because the girls kept up such a "cessation" through the room.) There was also a Miss Caroline Delafield, who lived at her Uncle's, Gen'l Tallmadge's,1 and came to certain recitations only.

Old Grove Catlin kept the Hotel in Litchfield, and had a daughter Flora, who was quite a belle. The law students used to quiz him about his daughter's popularity, and he said, "Yes, my daughter Flora is assassinated most every night" (meaning serenaded) He also said he wore his old-fashioned watch seal "for the antipathy of the thing" (meaning antiquity) — Dr Beecher had two colored servants named Zillah and Priscilla — I remember their grinding the coffee for breakfast. There was a large sink in the kitchen, and a couple of basins, and we had to go there to wash — It was the only place — so of course we could not take much of a bath — which was a great trial to me.

While I was at Dr Beecher's, the Rev. Mr. Nettleton, the revivalist, came to visit him, and I remember their drinking cider and pearlash with their breakfast.
Posted by Barbara Wells Sarudy at 4:00 AM