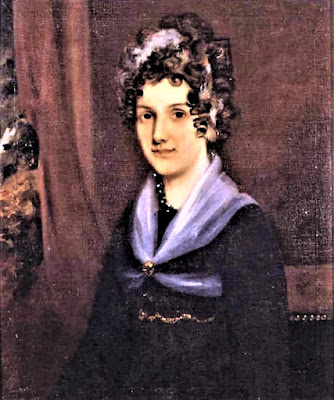 The Library of Congress tells us, that the household and kitchen accounts maintained by Thomas Jefferson's granddaughter, Anne Cary Randolph (1791-1826), at Monticello from August 1805 to October 1808 illustrate the vitality of the undirected activities and the entrepreneurial spirit of the slaves on Jefferson's plantations in Albemarle County, Virginia. These accounts of provisions purchased from Jefferson's slaves, other slaves in the neighborhood, and local free whites also offer a rare view of the interaction of plantation mistresses, slaves, and free white women.

Between 1805 and 1808 Thomas and Martha Jefferson’s teenaged granddaughter kept her household accounts in the blank pages of a notebook previously used by her grandparents. This essay reveals and contextualizes Randolph’s practice of trading with Monticello’s slaves.

Students of slavery in the United States have begun to explore the significance of slaves' personal land plots and crops in the Southern plantation system. Plantation owners and managers were sharply divided on the subject. Should slaves be allowed to raise their own crops? What animals and crops should they be allowed to raise? Should they be allowed to sell or trade these crops? And to whom? Four years of accounts from Thomas Jefferson's Monticello suggest how these questions were answered in one of America's most notable plantation communities.

Scattered evidence exists to suggest that plantation owners purchased food and even money crops, such as tobacco, from their slaves. For example, James Barbour, a neighbor of James Madison, routinely purchased chickens, eggs, and brooms from his slaves in the 1820s and 1830s, according to information in the Barbour Papers at the University of Virginia. Household accounts were normally kept by the plantation mistress or her daughter, and unfortunately women's records of this kind were seldom saved for posterity. However, Anne Cary Randolph's accounts are an exceptionally coherent, detailed, and lengthy record for a plantation as large and important as Monticello. Their survival is undoubtedly due to their location in the same memorandum book in which Jefferson had maintained a record of legal cases tried in Virginia.

Anne Cary Randolph, the child of Martha Jefferson Randolph, Jefferson's oldest daughter, and her husband, Thomas Mann Randolph, repurposed the blank pages of a volume previously used by both her grandparents. She turned the volume over and entered the accounts so that would be read in the opposite direction (and would appear upside down) from the text in the rest of the volume. This practice was not uncommon in the eighteenth and early nineteenth centuries, when paper was scarce or expensive. When this volume was microfilmed, Anne Cary Randolph's accounts were filmed first, and the remaining pages were rotated and filmed in reverse order.   This online presentation restores the pages to a sequence that more closely matches the original volume.

The accounts begin in 1805, when Anne Cary Randolph was fourteen years old, and cover a four-year period. They reflect what was in essence an apprenticeship preparing Anne Cary Randolph for marriage and the occupation of plantation mistress. The accounts end in October 1808, following Anne's September 19 wedding to Charles Lewis Bankhead and shortly before the couple's departure for the Bankhead family homestead in Port Royal, Virginia. The Bankheads soon settled at Carlton, a plantation on the west side of Monticello mountain, where Anne Cary Randolph Bankhead was able to use the training she had received as a teenager at Monticello.

Anne Cary Randolph carefully recorded the transactions of purchases from Jefferson's slaves, other slaves in the neighborhood, and local free whites for the use of the kitchen at Monticello. It is not clear from the records whether all of the items purchased were used solely for the white residents and visitors at Monticello or whether some of the goods were shared with the slave and free white staff. Anne Cary Randolph noted the date of purchase, the name of the seller, the name and number of items purchased, and the amount of money in pounds, shillings, and pence paid or credited to each person.

These records contain material important to the study of slave communities and the plantation economy, such as the occupations of slaves and free whites, products sold and not sold by slaves, the amount of money and credit given for various items, and information about the rhythm of plantation life. They also contain information vital to genealogists and descendants of those people mentioned in the accounts, locating slaves at Monticello and neighboring plantations by name in time and space.

These records suggest answers to many, though not all, of the basic questions about the importance of slave land plots and crops. Did a few slaves dominate the trade with the plantation mistress? In fact, the accounts do reveal that only five of the seventy-one active traders had ten or more transactions. Wormley (1781-aft.1851), a gardener at Monticello, sold food items to Miss Randolph on forty-three occasions over four years to become the leading slave purveyor of foodstuffs to the Monticello kitchen. The accounts reveal that slaves never sold products of cattle, sheep, or hogs to the Monticello kitchen. Were slaves not allowed to own these animals? Apparently not. The accounts show that the overseers' wives and slaves competed in sales of some provisions, such as chickens, eggs, and honey, but not in the sale of butter or tallow. They show that some individuals, such as Ursula (1787-aft.1824) and John Hemings (1775-aft.1830), routinely collected the money due to other slaves. Chickens, eggs, and vegetables were the items most often sold by slaves to the Monticello kitchen, according to these accounts, and the slaves received money and credit for their goods.

Unfortunately there are no corresponding accounts to show what the slaves did with their money. No records exist to reveal what they purchased or whether they purchased items from each other, from stores in nearby Charlottesville or Milton, from itinerant peddlers, or from neighboring free whites. No records show whether Jefferson or his overseers maintained a store for "sundries" or simply sold the slaves additional pork or corn. Indeed, no records reveal whether the slaves saved their money to purchase their own or a relative's freedom.

The accounts also raise questions vital to interpreting the interrelationships of slaves and white women in the plantation setting. For example, what were the economic relationships of white women and slaves, women and children, slaves and overseers' wives, and among enslaved men and women? They raise equally important questions about the spirit and ethos of the slave community in a large plantation setting. One thing is clear. The pattern of human interaction on the plantation was exceedingly complex and blacks and whites were joined by more than simply a master-slave relationship.

When Anne Cary Randolph was keeping these records, Thomas Jefferson, author of the Declaration of Independence, was the third president of the United States, a position he held from 1801 to 1809. He was also the owner of a large plantation complex including holdings in the Virginia counties of Albemarle, Goochland, James City, Cumberland, Amherst, Rockbridge, and Bedford. Altogether Jefferson's properties comprised more than ten thousand acres manned by nearly two hundred slaves and free whites. The overseers and most of the artisans and foremen were white, while the laborers, apprentices, and artisan's assistants were generally slaves either owned or rented by Jefferson and his wife Martha, his daughters Martha and Mary and their husbands Thomas Mann Randolph and John Wayles Eppes, or his grandchildren and their spouses.

While he was president, Jefferson failed to maintain detailed rolls of his slaves in his "farm book," or plantation record. The only existing roll for this period is that for his Bedford properties in 1805, which lists seventy-one slaves of all ages. Consequently, the household accounts kept by Anne Cary Randolph are additionally valuable as a contemporary record of Jefferson's Albemarle County slaves. They list seventy-nine residents of Albemarle, including seventy-one slaves. In 1810 Jefferson's rolls listed 126 slaves of all ages at the Albemarle plantations and eighty-six on his Bedford properties.
Posted by Barbara Wells Sarudy at 4:00 AM