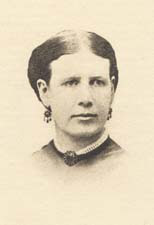 From A New England Woman's Diary in Dixie in 1865

This book relates the experience of two northern white women, Mary Ames, 1832-1903, and Emily Bliss, who were employed in 1865 as teachers by the Freedmen's Bureau and sent to South Carolina to open a school for former slaves. The account is told through excerpts from the diary of Mary Ames. It follows the women's journey to Edisto Island, South Carolina, formerly a region of cotton plantations, where many liberated slaves had been settled by the Reconstruction government. Ames tells of the poor living conditions of the former slaves, and the widespread decay and squalor of the homes on the island--including the abandoned plantation house in which she and her companion settled. Despite inconveniences such as a leaky roof, insects, snakes, and inconsistent rations, the women managed to establish a school with an enrollment of well over 100 students, both children and adults.

The women remained on the island for a little over a year. Ames' diary entries tell of her dealings with the former slaves, and document their social and religious life. She also tells of the difficulties of day-to-day life in the Reconstruction South, including the lack of food, water, and other necessary supplies. By May of 1866, the Freedmen's Bureau announced that they would no longer support the school. The women closed the school in July, then returned to Massachusetts in September, a little more than a year after they had arrived. See Documenting the American South (DocSouth.unc.edu), a digital publishing initiative of the University Library at the University of North Carolina at Chapel Hill.

Christmas, 1865
All of us at headquarters were invited to dine on Christmas with Captain and Mrs. Towles, and their friends on Wadmelaw Island. It was a foggy morning, and we were not in the best of spirits. Four of the soldiers rowed us in a pontoon. The dinner of wild turkey, etc., was excellent. The ladies who were asked to meet us, and whom we liked, had been sent out by the Philadelphia Society. Captain Towles had got a fiddle and an old negro to play it, and insisted upon our dancing, because it was Christmas and we must be merry. It was bad music and worse dancing, but we danced ourselves into a great heat and great good spirits. At seven we started for home....
Posted by Barbara Wells Sarudy at 4:00 AM