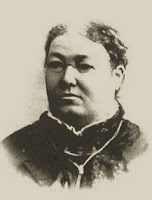 About the writer: Sarah Waldsmith Young was born on February 21, 1828 in Hamilton County, Ohio. She was the daughter of Abner Young, born 1799 in Maine, and Jane Waldsmith, born 1806 in Hamilton County, Ohio. Her husband James W. Bovard had been born in Steubenville, Ohio in 1828. They married February 29, 1844 in the small crossroads town of Alpha in Scott County, Indiana, which was nestled in southern Indiana.

One of her children had died before she began writing her diary. Oliver William Bovard died Nov. 11, 1857 at 12 years, 8 months and 6 days old. By 1866, Sarah would have four more children, two would go on to become college presidents.

Sarah's "notorius Mr. Brown" was Connecticut-born John Brown, 59, who led a raid on Harper's Ferry, and was executed on December 2, 1859 in Charles Town, Virginia. Unlike most Northerners, who advocated reasoned resistance to pro-slavery forces, Brown was compelled to violent action to end slave-holding. Fed up with the pacifism of the organized abolitionist movement, he reportedly said "These men are all talk. What we need is action - action!"
Brown's final "action" was the 1859 raid he led on the federal armory at Harpers Ferry, Virginia. He seized the federal arsenal; killing 7 (including a free black); & injuring 10. He intended to arm slaves with weapons liberated from the arsenal, but the attack failed. Within 36 hours, Brown's men had fled or been killed or captured by livid local farmers, incensed militiamen, and still armed U.S. Marines led by the soon to be famous Robert E. Lee.
"Had I interceded...in behalf of the rich, the powerful, the intelligent, the so-called great, or in behalf of any of their friends, either father, mother, sister, wife or children, or any of that class, and suffered and sacrificed what I have in this interference, it would have been right. Every man in the court would have deemed it an act worthy of reward rather than punishment," John Brown declared in court after his conviction.

THURSDAY, DECEMBER 8, 1859 We was cold last night. The coldest time I ever seen, do not get much work done. I sew all day and tell scripture stories to the children-hear them say lessons. James cuts wood and does the feeding. Oh how my tooth aches. Sad company. All well.

FRIDAY, DECEMBER 9, 1859 Some moderate this morning. I commence weaving this morning. But have to quit and wash the clothes. I fry some crills. Sew and nurse the babe. Hurry--try to get some work done--too much to do to get along with our troubles. James went to mill with some buckwheat in the sled-hauled wood.
Notes:
I think crills or cruls (probably a corruption of the word 'curls') were like today's curly fries. One reasercher found a recipe for Potato Crulls in a Chicago publication of 1883: Pare good, smooth potatoes raw. Cut them into thick slices. Cut out the centers with an apple corer, making rings. Take a small penknife and begin inside and cut the slice all around into a coil or string as thin as may be without breaking through till the knife comes out at the outer edge. Fry the crulls in hot lard, light colored. Drain, and sprinkle with fine salt. Another researcher thought they might have been twisted sweet cakes.

WEDNESDAY, DECEMBER 14, 1859 James helps pap kill hogs to day. I weave. James comes home at noon then goes to Maria Byfield's (wife of her brother Christian Young) to saw timber. The children goes to school. Little Jimmy (son 18 months old) is beginning to walk around. Frozen some--snow on the ground. Plenty to eat-not much work-these days are so short.

FRIDAY, DECEMBER 16, 1859 Up early-James off to town. Mary Foster (neice) comes home with Maria Jane (daughter b.1849) from school to stay all night with us. Marion (son b. 1847) goes to husking of corn to Christian Young’s (Sarah's brother b. 1824). I wove to day. Catherine (sister) come to day. I sew at night. Little James Carvossa (son 18 months old) walk all over the place now.

WEDNESDAY, DECEMBER 21, 1859 James cuts wood yesterday. I went to hunt him in the evening--thought a tree had fallen on him-found him still cutting wood. I waded through the snow. I weave till noon then wash. Mr. Belch comes, takes dinner with us. Takes till dark to wash the clothes. Very tired. William went by from mother’s.
Note:
Nicholas Belch was a neighbor.
Sarah's sister Ethe had married as a young teenager and unexpectedly became a widow within a few short years, suddenly alone with 2 young children. Ethelina Young (born 1842) was just 15 when she married Francis Peacock (born 1831) in 1857. Apparently, Francis died sometime after 1863. Ethelina was a widow living with her two children, Emma, age 11, and William, age 7, in 1870. In 1876, Ethelina married Nicholas Belch. In 1880, Nicholas and Ethelina Belch still were living in Scott County with two of his children, Willie (born 1869) and Emma (born 1870) and her two children Emma, now 21, and William, now 17, plus a new daughter, Carrie, age 2.
William is probably William Foster, the oldest son of Robert C. Foster and Catherine Waldsmith. Catherine was Sarah's aunt. Sarah's cousin William Foster was born in 1834.

FRIDAY, DECEMBER 23, 1859 Now I have a cold time. A hard day’s work to render. Up late, done all my work to day. Plenty of meat and lard this year. Pretty good sleighing now--but I have no time to spare.
Note:
Apparently Sarah's husband had recently slaughtered an animal. Sarah was rendering whole animal fatty tissue into purified fats like tallow and lard usually for making soap and candles. Sarah would chop the fatty tissue into fine pieces and then cook it in a kettle of water slowly at a low temperature (less than the boiling point of water). Then she would let the mixture cool and separate the lumpy water and fat mixture from the solids.

SUNDAY, DECEMBER 25, 1859 Here it Christmas morning. We looked for visitors last night but did not come. Begins to thaw, the snow is melting fast. James took me to the meeting in the sled then to Mr. Thompsons--then home in the evening. Mother is here, She had company to day. We are all well. We have crulls and corn bread and sausage and sause to eat.
Notes:
David Thompson, 41, and his wife Mary A., 38, lived nearby with their 5 children.
Souse refers to various parts of a pig or other animal, especially the feet and ears, prepared or preserved for food by means of pickling.

You might enjoy reading Sarah Bovard's Diary from its beginning in January of 1859. Free websites containing all diary entries include: http://www.rootsweb.ancestry.com/~inscott/BovardDiary.html
Posted by Barbara Wells Sarudy at 4:00 AM