From the beginning of the Shaker movement, dancing, or “laboring” under operations of the spirit was an essential element of Shaker worship. The Shakers found several reasons to add dance to their worship. They found 19 scripture passages saying that said they should dance for the Lord.  They also reasoned that God created the whole body, not just the mouth & hands; therefore, they should praise the Lord with their whole bodies. The communal family often gathered in its family meeting room to worship during the weekday evenings, at first in spontaneous, individual dancing, & later to repeat intricate dance steps. 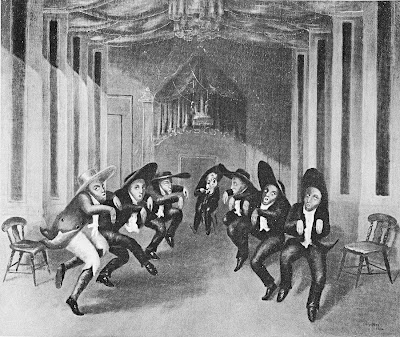 Shaker Dance by C. Winter from Dan Emmett and the Rise of Early Negro Minstrelsy by Hans Nathan

An anonymous observer among the Shakers at Albany, NY, recorded these observations:

"At half past seven p.m. on the dancing days, all the members retired to their separate rooms, where they sat in solemn silence, just gazing at the stove, until the silver tones of the small tea-bell gave the signal for them to assemble in the large hall.

"Thither they proceeded in perfect order and solemn silence. Each had on thin dancing shoes; and on entering the door of the hall they walked on tip-toe, and took up their positions as follows: the brothers formed a rank on the right, and the sisters on the left, facing each other, about five feet apart.

"After all were in their proper places the chief Elder stepped into the center of the space, and gave an exhortation for about five minutes, concluding with an invitation to them all to 'go forth, old men, young men and maidens, and worship God with all their might in the dance.' Accordingly they 'went forth,' the men stripping off their coats and remaining in their shirt-sleeves. 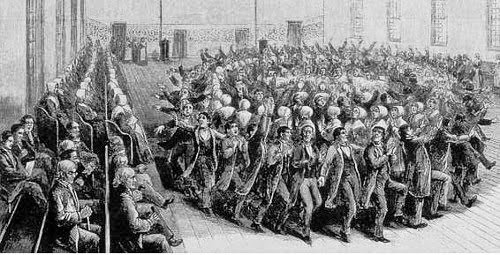 "First they formed a procession and marched around the room in double-quick time, while four brothers and sisters stood in the center singing for them. After marching in this manner until they got a little warm, they commenced dancing, and continued it until they were pretty well tired.

"During the dance the sisters kept on one side, and the brothers on the other, and not a word was spoken by any of them. After they appeared to have had enough of this exercise, the Elder gave the signal to stop, when immediately each one took his or her place in an oblong circle formed around the room, and all waited to see if anyone had received a 'gift,' that is, an inspiration to do something odd. Then two of the sisters would commence whirling round like a top, with their eyes shut; and continued this motion for about fifteen minutes; when they suddenly stopped and resumed their places, as steady as if they had never stirred..." 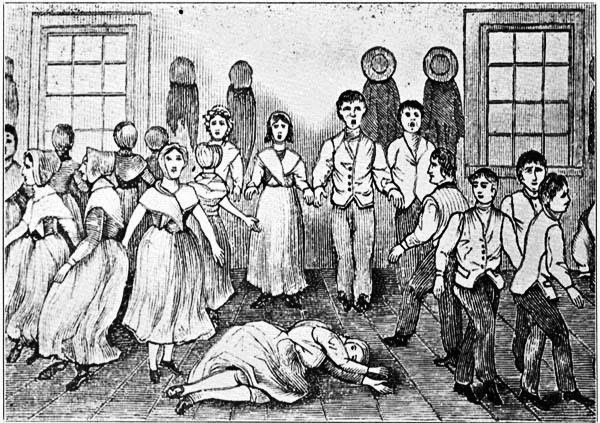 
"The main attraction for tourists was Sunday public worship meeting, when hundreds of spectators crowded into the meetinghouse to watch the Shakers perform the dances that gave them their name. The effect on the audience was electric. Outsiders who could tolerate celibacy and communalism, and even shrug their shoulders at the notion that men and women were equal, were scandalized by the idea of dancing in church. Amazed, amused, or aghast, shocked observers likened Shakers at worship to kangaroos, dancing bears, and overgrown antelopes bounding around the room. “Senseless jumping,” Emerson wrote, “this shaking of their hands, like the paws of dogs.”


The Graphic, May 14, 1870 Shakers at Meeting. The Religious Dance. Illustration by Artist Arthur Boyd Houghton

Most of their worship was singing and dancing. In the beginning, the dancing was done individually. Later in the 1800s the dancing became more organized and practiced by the group as a whole. The complicated steps and interesting formations brought hundreds of people to watch the Shakers dance.


“And to work they went with one accord,” observer Mrs. Hall reported, “singing or rather screaming, tunes of a kind of jig time, at the same time walking round the room with a swinging step somewhat between a walk and a dance and flapping their hands with a penguin kind of motion.”

When true simplicity is gained,
To bow and to bend we shan't be ashamed.
To turn, turn will be our delight,
'Til by turning, turning we come round right