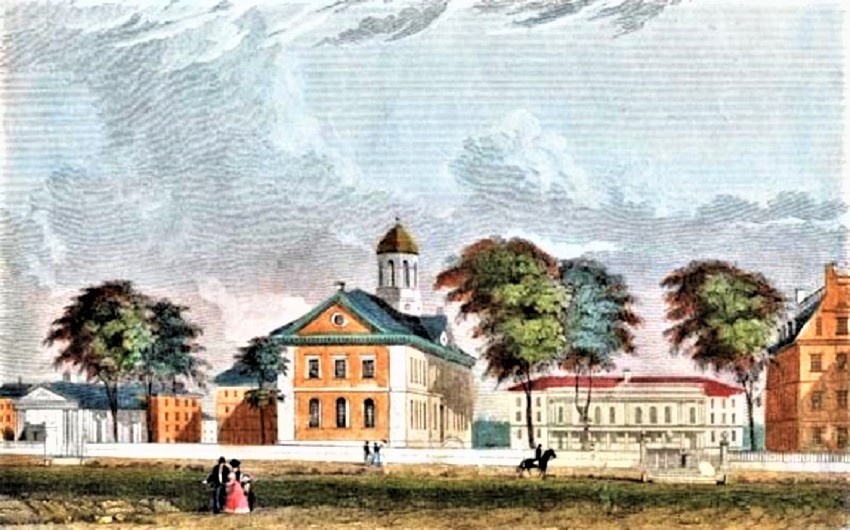 Women’s exclusion from the University began “as a part of the social order of the time," one that went largely unquestioned by both men and women and that was connected to both “tradition and privilege,” said historian Helen Lefkowitz Horowitz, speaking at the Radcliffe Institute, in a talk titled “It’s Complicated: 375 Years of Women at Harvard."

In a talk titled “It’s Complicated: 375 Years of Women at Harvard,” the professor emerita of history and American studies at Smith College examined the University’s shifting gender landscape, contending that while the Harvard of today has much to celebrate in regards to women, it still has room to improve.

Just as important to the two historians, said Cohen, “was how the history of women at Harvard might be well represented in the course of the anniversary year.”

Faust offered opening remarks at Monday’s event, saying that the past 100 years can be seen as “a narrative of progress” for women at Harvard. Horowitz’s talk, she said, offered “important and enduring lessons for Harvard” — about how change happens, and about how those committed to learning and opportunity “can make their way into a world that comes increasingly to accept and embrace them.”

Women’s exclusion from the University began “as a part of the social order of the time,” said Horowitz, one that went largely unquestioned by both men and women and that was connected to both “tradition and privilege.”

Established in 1636 to educate an all-male clergy, Harvard by the 18th century had developed into a college to educate the “sons of the arriving mercantile elite.” During the industrial revolution of the 19th century, Boston bluebloods and Harvard, she said, “rose together.”

The first women to knock at Harvard’s doors came from the middle class, typically schoolteachers looking for extra instruction in the sciences. But they were merely “thrown crumbs,” such as access to lectures or labs, said Horowitz.

When a group of powerful women, including Elizabeth Cary Agassiz, widow of the famous Harvard scientist Louis Agassiz, founded the Women’s Education Association of Boston, in 1872, and sought to gain the entrance of women into Harvard, it was met with steady resistance.

“We were told not to disturb the present system of education which is the result of the experience and wisdom of the past,” read Horowitz from the group’s records. She noted that at the time both Harvard President Charles William Eliot and the Harvard Corporation were “deeply opposed” to allowing women into Harvard.

Eliot, Faust remarked in her 2004 essay titled “Mingling Promiscuously: A History of Women and Men at Harvard,” “established his position in his inaugural address, declaring that the policing of hundreds of young men and women of marriageable age would be impossible. He had doubts, moreover, about what he called the ‘natural mental capacities’ of the female sex.”

But the association, said Horowitz, would not be deterred. They turned to an innovative solution, developing an institution of their own, one located near Harvard that would offer female students instruction by Harvard professors, “the same courses they taught men in the Yard.”

The “Harvard Annex” opened its doors in 1879. By 1890 more than 200 women were being taught by 70 men. Yet Agassiz continued to push for more. In 1894, Radcliffe College was granted an official charter by the Commonwealth of Massachusetts. Agassiz was its first president.

Faust, Harvard’s Lincoln Professor of History, described the new college in her 2004 paper. Radcliffe, she wrote, represented a “compromise between what women wanted and what Harvard would give them, as an alternative to the two prevailing models of coeducation and separate women’s institutions. Radcliffe College would educate women by contracting with individual Harvard faculty to provide instruction, would offer its own diplomas, to be countersigned by Harvard’s president, and would be subjected in academic matters to the supervision of ‘visitors’ from Harvard.”

Yet though women were making significant inroads, they were still set apart from Harvard, a separation that may have come with unseen costs, said Horowitz.

“What does it mean to a woman student that there are no female models?” she wondered.

“For better or worse,” said Horowitz, “professors are models, as well as inspirers.”

A more complex picture emerged Harvard’s graduate Schools. The Harvard Graduate School of Education was the first to admit women in 1920. Harvard Medical School accepted its first female enrollees in 1945 — though a woman first applied almost 100 years earlier, in 1847. Women began petitioning Harvard Law School for admittance in 1871. The School opened its doors in 1950, but that was 20 years behind most law schools in the country, said Horowitz.

The author and former Radcliffe fellow even offered her own experience with Harvard’s “complicated” approach to women. When she was denied acceptance to Harvard’s graduate program in history in 1962, she protested her rejection to Dean Kirby-Miller, the recently displaced dean of the Radcliffe Graduate School. Kirby-Miller agreed that she had been discriminated against, then promptly refused to take her case, telling Horowitz “she had lost two better ones in the last week.”

In 1963, Harvard degrees were awarded to Radcliffe students for the first time. In 1967, Lamont Library allowed women access. In 1975, the two Colleges merged their admissions. In 1977, “a critical date,” Harvard’s ratio of four men to one woman ended with “sex-blind admissions.” In 1999, Radcliffe officially merged with Harvard, and the Radcliffe Institute for Advanced Study was born.

“Moving an institution towards equity turns out to be hard work,” said Horowitz. Harvard has made great progress, she said.

Of the 16 members of the Harvard Council of Deans, seven are women, and women also hold many other top administrative posts at the University, she said. While the faculty still strives for greater diversity, what’s important to remember, said Horowitz, is that the University has a “clear tenure track system” in place, which offers women a road in.

Still, other changes are needed if women are to be convinced to stay at Harvard, and other academic institutions, long enough to pursue tenure — specifically, changes in regards to starting a family and caregiving.

“To achieve equity requires that educational institutions provide women with a wide range of services and a flexible career clock, enabling the balance of working and caregiving. To be gender blind about this, is to be blind about the reality of many women’s lives.”
Posted by Barbara Wells Sarudy at 4:00 AM