Mother Mary Lange, the foundress of the Oblate Sisters of Providence, was born Elizabeth Lange in the around 1794, in Santiago de Cuba, where she lived in a primarily French speaking community. She received an excellent education; & in the early 1800s, Elizabeth left Cuba & settled in the United States. By 1813, she was in Baltimore, Maryland, where a large community of French speaking Catholics from Haiti was established.  It did not take Lange long to recognize, that the children of her fellow immigrants needed an education.  There was no free public education for African American children in Maryland until 1868. She responded to that need by opening a school in her home in the Fells Point area of Baltimore for the children. She & her friend, Marie Magdaleine Balas (later Sister Frances, OSP) operated the school for over 10 years.

Reverend James Hector Joubert, SS, who was encouraged by James Whitfield, Archbishop of Baltimore, presented Elizabeth Lange with the idea to found a religious congregation for the education of African American girls.  Father Joubert would provide direction, solicit financial assistance, & encourage other "women of color" to become members of this, the 1st congregation of African American  women religious in the history of the Catholic Church.  Elizabeth joyfully accepted Father Joubert's idea.  At the time black men & women could not aspire to religious life.  On July 2, 1829 Elizabeth & 3 other women professed their vows & became the Oblate Sisters of Providence. 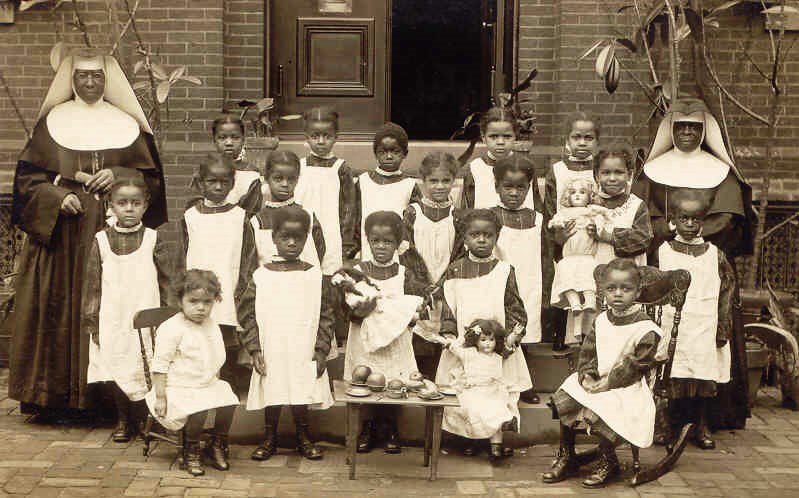 Elizabeth, foundress & first superior general of the Oblate Sisters of Providence, took the religious name of Mary. She was superior general from 1829 to 1832, & from 1835 to 1841.  This congregation would educate & evangelize African Americans. And they would always be open to meeting the needs of the times. Thus the Oblate Sisters educated youth & provided a home for orphans. Slaves who had been purchased & then freed were educated & at times admitted into the congregation. They nursed the terminally ill during the cholera epidemic of 1832, sheltered the elderly, & even served as domestics at Saint Mary's Seminary.

Mother Mary's early life prepared her for the turbulence that followed the death of Father Joubert in 1843. There was a sense of abandonment at the dwindling number of pupils & defections of her closest companions & co-workers. Mother Lange never lost faith.  To her black brothers & sisters she gave herself & her material possessions; until she was empty of all but Jesus, whom she shared generously with all by witnessing to His teaching. God called her home, February 3, 1882 at Saint Frances Convent in Baltimore, Maryland.

The Oblate Sisters of Providence is the first successful Roman Catholic sisterhood in the world established by women of African descent.  It was the work of a French-born Sulpician priest & four women, who were part of the Caribbean refugee colony which began arriving in Baltimore, Maryland in the late eighteenth century. Father James Hector Nicholas Joubert, SS, a Sulpician priest discovered it was difficult for the Haitian refugee children to master their religious studies because they were unable to read. He heard of two devout religious Caribbean women who were already conducting a school for black children in their home in Baltimore.  In 1828 those two women, Elizabeth Lange (later Mother Mary Lange ) & Maria Balas accepted his proposal to start a sisterhood with the primary mission of teaching & caring for African American children. After adding 2 more women, Rosine Boegue & American-born Theresa Duchemin, they began studying to become sisters & opened a Catholic school for girls in their convent at 5 St. Mary's Ct. in Baltimore. Thus began St. Frances Academy. It is the oldest continuously operating school for black Catholic children in the United States & is still educating children in Baltimore. 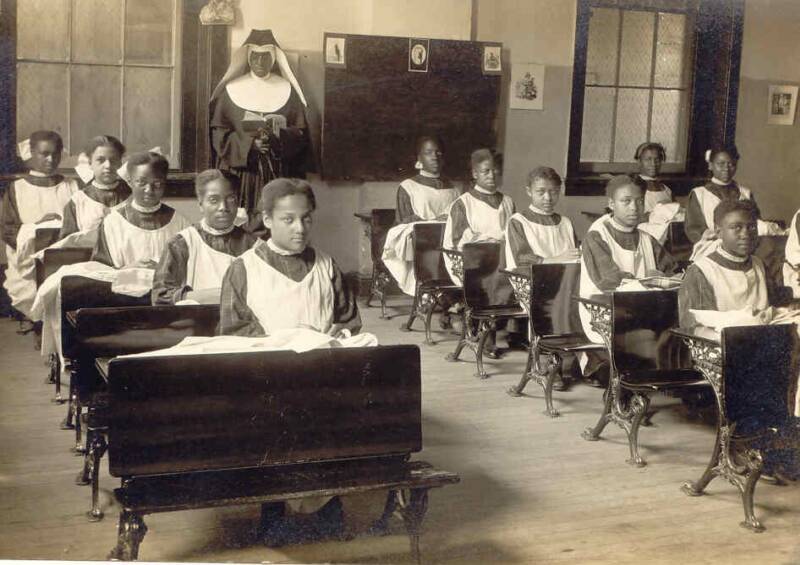 The four novices in this pioneer society were forced to vacate their first house & moved to a rented house at 610 George St. Baltimore.  Here in their chapel the four women took their vows, & the first women religious order of women of African descent was officially founded on July 2, 1829.  In December of that year the four sisters & the school moved to a rowhouse at 48 Richmond Street.  This location would be the motherhouse for the order for the next 31 years. In the next few years the order & school quickly outgrew the rowhouse & purchased some adjoining properties.  A bigger school & new chapel were built in 1836.  The new chapel is especially significant because it was not only for the use of the convent of the Oblate Sisters of Providence but was also used by Baltimore's black Catholics.  This would be the first time American black Catholics had their own separate chapel for worship, baptisms, marriages, confirmations & funerals.

The order continued to prosper & grow through the early 1840s.  However, the death of Father Joubert in 1843 left the Oblates without the person who had helped & supported them from their inception.  Since their primary mission was the education of men for the religious life, the Sulpicians decided not to minister to the Oblates any longer.  At the same time paid enrollment in the school began to wane; & by 1846, there were only 8 students in the school who paid tuition.  The order asked permission from the Bishop to beg on the streets in order to help support the convent.

Since the Sulpicians no longer ministered to the sisters on a regular basis, the Oblates began to walk the short distance to St. Alphonsus for the sacraments.  St. Alphonsus was a church conducted under the direction of the Redemptorist order & generally served the Baltimore's growing German community.  Through their association with the Redemptorists the sisters met Father Thaddeus Anwander, CSsR. who became their ecclesiastical director in 1847.  Under Fr. Anwander the order again began to grow & prosper.  A separate school was opened on the property & the first time the Oblates began to teach boys.  The sisters opened other Catholic schools for African American girls in the city as well as teaching adult women in evening classes & opened a home for widows.   In 1860, the sisters were notified that the Redemptorists were giving up their directorship of the community.

The order then came under the directorship of the Society of Jesus (Jesuits).  Under the directorship of the Jesuits the OSPs for the first time began missions outside of Baltimore.  They opened a mission in Philadelphia in 1863, & one in New Orleans in 1867.  The order remained under the directorship of the Jesuits until 1871, when priests from the Josephite Fathers & Brothers became their directors. This was a natural alliance since the mission of the Josephites is to minister to the African American population.  Eventually the order founded schools in 18 states. Some missions only lasted a few years, while others endured & changed with the needs of the community. By the 1950's there were over 300 Oblate Sisters of Providence teaching & caring for African American children, as they do to this day.
Posted by Barbara Wells Sarudy at 4:00 AM