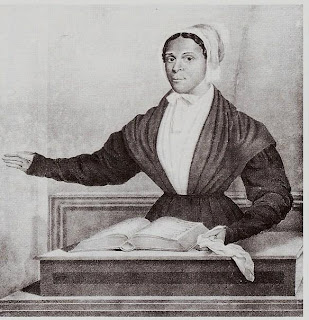 In the first half of the 19th century, Juiann Jane Tillman was an AME evangelist. In 1816, Richard Allen (1760-1831) and his colleagues in Philadelphia broke away from the Methodist Church and founded the African Methodist Episcopal Church, which, along with independent black Baptist congregations, flourished as the century progressed. Richard Allen allowed women to become evangelists and teachers but not church leaders. By 1846, the A.M.E. Church, which began with eight clergy and five churches, had grown to 176 clergy, 296 churches and 17,375 members.
Posted by Barbara Wells Sarudy at 4:00 AM