.
One of the earliest formal portraits of an African American - a well-known oil painting of a kufi-wearing free black man painted by Charles Willson Peale in 1819 - has been sold by the Philadelphia History Museum at the Atwater Kent to the Philadelphia Museum of Art. 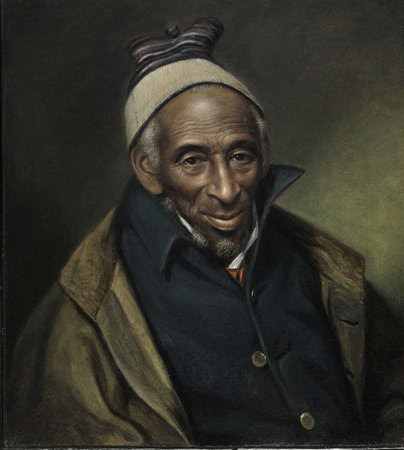 Charles Willson Peale (American painter, 1741-1827). Yarrow Mamout is believed to be the earliest known portrait of a practicing American Muslim.

In 1819, Charles Willson Peale headed down to Washington DC to paint portraits of President James Monroe, Henry Clay, and other dignitaries for exhibition in the famed Peale museum located in Independence Hall.

But there was another sitter the painter wanted to snare on his trip.

"I heard of a Negro who is living in Georgetown said to be 140 years of age," Peale wrote in his diary. "He is comfortable in his Situation having Bank stock and lives in his own house."

The man was Yarrow Mamout, a free African, a Muslim who indeed held bank stock, purchased with great effort to secure a comfortable old age - after a life of abduction and bondage. (He was, however, most likely only in his 80s.)

Mamout, known throughout Georgetown as affable and chatty, sat for Peale for at least two days, talking about his life.

The finished portrait - the earliest known rendering of an American Muslim and an extremely rare early portrayal of a free African - has been purchased by the Philadelphia Museum of Art from the Philadelphia History Museum at the Atwater Kent. It is already on view at the Art Museum.

"It's such a wonderful picture," said Kathleen A. Foster, the museum's senior curator of American art. "It's been cleaned. He looks so great, so great. It just sparkles."

She continued: "We're never going to take that painting down. It will be out seven days a week. It's such a great story."

Mamout told at least some of that story to Peale (who was 78 years old at the time), fascinating the painter and inspiring him to fill his diary with Yarrow Mamout anecdotes.

Mamout had been born in West Africa (probably Guinea), captured by slave traders, and shipped to America when a teenager in the early 1750s.

Once here, he was purchased by Samuel Beall of Maryland and passed on to his son, Brooke Beall.

Brooke Beall told Mamout sometime in the 1790s that if he helped build the Beall home in Georgetown, he would be freed when it was completed.

Although Brooke died before the house was done, his widow kept the promise, freeing Yarrow Mamout.

Peale was so intrigued by this story that he visited the widow, who confirmed it.

After he was freed, Mamout went on to work tirelessly as a laborer, saving money, losing it, saving more, and eventually acquiring some measure of security as one of Washington's few free blacks in the early 19th century.

"Yarrow owns a house & lotts and is known by most of the Inhabitants of Georgetown & particularly by the Boys who are often teazing him which he takes in good humour," Peale confided in his diary. "The acquaintance of him often banter him about eating Bacon and drinking Whiskey - but Yarrow says it is no good to eat Hog - & drink whiskey is very bad."

After completing the portrait, Peale brought it back to Philadelphia and hung it in his museum, perhaps as a complement to the portrait of Absalom Jones - noted clergyman and cofounder of Philadelphia's Free African Society and leader of the African Episcopal Church of St. Thomas - painted by Raphaelle Peale, Charles' son.

Exhibited with Peale renderings of the nation's eminent statesmen, including George Washington, Thomas Jefferson, and Benjamin Franklin, Yarrow Mamout was a magnet for visitors.

In 1854, long after Peale's death, his museum's holdings were liquidated, and Yarrow Mamout was purchased by a prominent Philadelphia Quaker and businessman, Charles S. Ogden. Ogden also purchased the Peale portrait of Washington painted at Mount Vernon in 1772, believed to be the first portrait of the future general and president.

Ogden apparently thought the two paintings were closely related because when he donated both to the Historical Society of Pennsylvania in 1892, he included a letter misidentifying Yarrow Mamout as Billy Lee, "Washington's favorite military servant during the war for Independence."

Lee was the only slave Washington freed immediately in his will.

Over the next century, Yarrow Mamout - who was not correctly identified until the 1940s - was often on exhibit at the historical society until 2001, when its ownership was transferred, along with virtually all of the 10,000 historical society artworks and artifacts, to the Atwater Kent.

The Kent showed the painting at least once, in 2004, in commemoration of Martin Luther King's Birthday and African American History Month.

"This portrait depicts a man who triumphed over enormous challenges and commanded the respect and admiration of all who knew him. It is a great thing that such an extraordinary painting will remain here so that it can continue to serve as an inspiration for all of our citizens."

Foster, of the Art Museum, said the painting represented a renaissance of Peale's artistic powers.