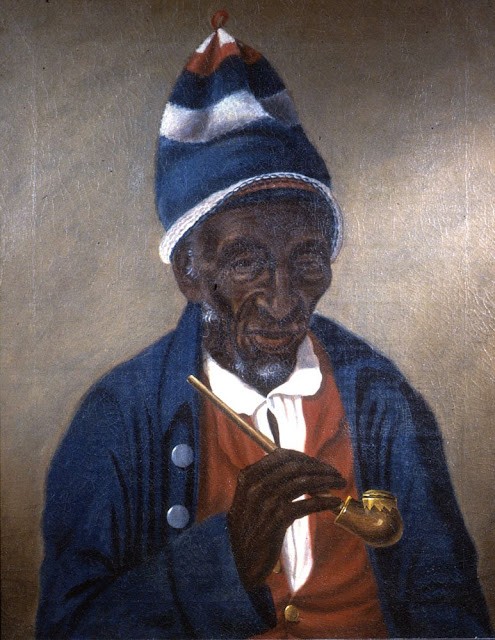 Georgetown artist James Alexander Simpson, a sometime painter & instructor at Georgetown College, painted this portrait of Yarrow Mamout in 1822. The Simpson portrait appears to have been painted from life & is not a copy of the much better known 1819 portrait (done when Mamout was about 83 years old) by the celebrated American painter, Charles Willson Peale. The Simpson painting was probably done in 1822 (the date on the label next to the painting), about two years before Yarrow's death.

Yarrow Mamout was born in Africa around 1736 and was a teenager when enslaved & brought to America, apparently no later than 1752. Yarrow (Mamout was his first name) was born & educated in Guinea, West Africa. Recent research shows that Yarrow probably was of Fulani heritage (in which the name Yaro still is used) & was literate in Arabic.

At about age 14 he was captured by slave traders & shipped to the United States, where Samuel Beall of Maryland purchased him. Beall bequeathed Yarrow to his son, Brooke Beall, who had Yarrow make bricks for a house he was building in Georgetown. After Brooke Beall's death his widow freed Yarrow in 1796. Yarrow saved the money he earned as a laborer & after 4 years was able to purchase a house & other property in Georgetown.

According to James H. Johnston’s 2006 Washington Post article, Yarrow himself was a survivor, having amassed a hundred-dollar nest egg for his retirement. Twice, merchants who held the money for him lost it when their businesses failed. Yarrow scraped & saved a third time, putting aside two hundred dollars, which he used to buy shares in Georgetown’s Columbia Bank, finally allowing him to support himself in retirement with the interest from his investment.

Yarrow, who followed the Muslim faith at a time when few Americans did, was immortalized by these two white artists near the end of his life. Yarrow reportedly was buried in his yard; research is ongoing into whether his remains are still there & whether any part of the house at 3324, 3330-3332, Dent Place NW in Georgetown could have been Yarrow's.

Blogging is a joy - a total extravagance, a chance to explore endless curiosities. Searching for WHY human society changes & what those living before us declare in their own words and in their design & images of themselves & of the world around them. As a historian, I must rely on archaeologists, using a variety of scientific tools, to find & help explain earlier evidence beyond that obvious on the surface.
Focusing mostly on gardens & women, I put together several blogs, different in the particulars but similar in the essentials. They are listed in the blogroll below. Honored to have you here -Welcome!