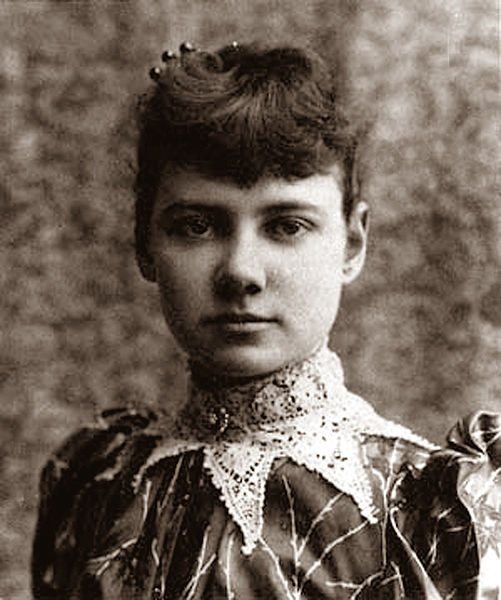 Born in Cochran's Mills, Armstrong County, Pennsylvania, 40 miles northeast of Pittsburgh, she began her work as a journalist at the Pittsburg Dispatch. Nellie Bly focused her early work for the Dispatch on the plight of working women, writing a series of investigative articles on female factory workers. But editorial pressure pushed her to the women's pages to cover fashion, society, and gardening, the usual role for female journalists of the day.

Unhappy reporting on women's events, Bly left the Pittsburgh Dispatch in 1887 for New York City. Penniless after 4 months, she talked her way into the offices of Joseph Pulitzer's newspaper, the New York World, and took an undercover assignment for which she agreed to feign insanity to investigate reports of brutality and neglect at the Women's Lunatic Asylum on Blackwell's Island.

After a night of practicing deranged expressions in front of a mirror, she checked into a working-class boardinghouse. She refused to go to bed, telling the boarders that she was afraid of them and that they looked crazy. They soon decided that she was crazy, and the next morning summoned the police. Taken to a courtroom, she pretended to have amnesia. The judge concluded she had been drugged. She was then examined by several doctors, who all declared her to be insane..
Posted by Barbara Wells Sarudy at 4:00 AM