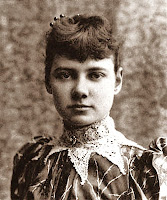 MISS TILLIE MAYARD suffered greatly from cold. One morning she sat on the bench next to me and was livid with the cold. Her limbs shook and her teeth chattered. I spoke to the three attendants who sat with coats on at the table in the center of the floor.

"It is cruel to lock people up and then freeze them," I said. They replied she had on as much as any of the rest, and she would get no more. Just then Miss Mayard took a fit and every patient looked frightened. Miss Neville caught her in her arms and held her, although the nurses roughly said:

"Let her fall on the floor and it will teach her a lesson." Miss Neville told them what she thought of their actions, and then I got orders to make my appearance in the office.

Just as I reached there Superintendent Dent came to the door and I told him how we were suffering from the cold, and of Miss Mayard's condition. Doubtless, I spoke incoherently, for I told of the state of the food, the treatment of the nurses and their refusal to give more clothing, the condition of Miss Mayard, and the nurses telling us, because the asylum was a public institution we could not expect even kindness. Assuring him that I needed no medical aid, I told him to go to Miss Mayard. He did so. From Miss Neville and other patients I learned what transpired. Miss Mayard was still in the fit, and he caught her roughly between the eyebrows or thereabouts, and pinched until her face was crimson from the rush of blood to the head, and her senses returned. All day afterward she suffered from terrible headache, and from that on she grew worse.

Insane? Yes, insane; and as I watched the insanity slowly creep over the mind that had appeared to be all right I secretly cursed the doctors, the nurses and all public institutions. Some one may say that she was insane at some time previous to her consignment to the asylum. Then if she were, was this the proper place to send a woman just convalescing, to be given cold baths, deprived of sufficient clothing and fed with horrible food?

On this morning I had a long conversation with Dr. Ingram, the assistant superintendent of the asylum. I found that he was kind to the helpless in his charge. I began my old complaint of the cold, and he called Miss Grady to the office and ordered more clothing given the patients. Miss Grady said if I made a practice of telling it would be a serious thing for me, she warned me in time.

Many visitors looking for missing girls came to see me. Miss Grady yelled in the door from the hall one day:

I went to the sitting-room at the end of the hall, and there sat a gentleman who had known me intimately for years. I saw by the sudden blanching of his face and his inability to speak that the sight of me was wholly unexpected and had shocked him terribly. In an instant I determined, if he betrayed me as Nellie Bly, to say I had never seen him before. However, I had one card to play and I risked it. With Miss Grady within touching distance I whispered hurriedly to him, in language more expressive than elegant:

I knew by the expression of his eye that he understood, so I said to Miss Grady:

"Do you know her?" asked Miss Grady.

"No; this is not the young lady I came in search of," he replied, in a strained voice.

"If you do not know her you cannot stay here," she said, and she took him to the door. All at once a fear struck me that he would think I had been sent there through some mistake and would tell my friends and make an effort to have me released. So I waited until Miss Grady had the door unlocked. I knew that she would have to lock it before she could leave, and the time required to do so would give me opportunity to speak, so I called:

"One moment, senor." He returned to me and I asked aloud:

"Do you speak Spanish, senor?" and then whispered, "It's all right. I'm after an item. Keep still." "No," he said, with a peculiar emphasis, which I knew meant that he would keep my secret.

People in the world can never imagine the length of days to those in asylums. They seemed never ending, and we welcomed any event that might give us something to think about as well as talk of. There is nothing to read, and the only bit of talk that never wears out is conjuring up delicate food that they will get as soon as they get out. Anxiously the hour was watched for when the boat arrived to see if there were any new unfortunates to be added to our ranks. When they came and were ushered into the sitting-room the patients would express sympathy to one another for them and were anxious to show them little marks of attention. Hall 6 was the receiving hall, so that was how we saw all newcomers.

Soon after my advent a girl called Urena Little-Page was brought in. She was, as she had been born, silly, and her tender spot was, as with many sensible women, her age. She claimed eighteen, and would grow very angry if told to the contrary. The nurses were not long in finding this out, and then they teased her.

"Urena," said Miss Grady, "the doctors say that you are thirty-three instead of eighteen," and the other nurses laughed. They kept up this until the simple creature began to yell and cry, saying she wanted to go home and that everybody treated her badly. After they had gotten all the amusement out of her they wanted and she was crying, they began to scold and tell her to keep quiet. She grew more hysterical every moment until they pounced upon her and slapped her face and knocked her head in a lively fashion. This made the poor creature cry the more, and so they choked her. Yes, actually choked her. Then they dragged her out to the closet, and I heard her terrified cries hush into smothered ones. After several hours' absence she returned to the sitting-room, and I plainly saw the marks of their fingers on her throat for the entire day.

This punishment seemed to awaken their desire to administer more. They returned to the sitting-room and caught hold of an old gray-haired woman whom I have heard addressed both as Mrs. Grady and Mrs. O'Keefe. She was insane, and she talked almost continually to herself and to those near her. She never spoke very loud, and at the time I speak of was sitting harmlessly chattering to herself. They grabbed her, and my heart ached as she cried:

"For God sake, ladies, don't let them beat me."

"Shut up, you hussy!" said Miss Grady as she caught the woman by her gray hair and dragged her shrieking and pleading from the room. She was also taken to the closet, and her cries grew lower and lower, and then ceased.

The nurses returned to the room and Miss Grady remarked that she had "settled the old fool for awhile." I told some of the physicians of the occurrence, but they did not pay any attention to it.

One of the characters in Hall 6 was Matilda, a little old German woman, who, I believe, went insane over the loss of money. She was small, and had a pretty pink complexion. She was not much trouble, except at times. She would take spells, when she would talk into the steam-heaters or get up on a chair and talk out of the windows. In these conversations she railed at the lawyers who had taken her property. The nurses seemed to find a great deal of amusement in teasing the harmless old soul. One day I sat beside Miss Grady and Miss Grupe, and heard them tell her perfectly vile things to call Miss McCarten. After telling her to say these things they would send her to the other nurse, but Matilda proved that she, even in her state, had more sense than they.

"I cannot tell you. It is private," was all she would say. I saw Miss Grady, on a pretense of whispering to her, spit in her ear. Matilda quietly wiped her ear and said nothing.
Posted by Barbara Wells Sarudy at 4:00 AM