Caroline Lee Hentz (1800-1856) was Alabama's 1st best-selling writer & one of the most popular women writers in antebellum America, who specialized women's domestic, romantic fiction. Although she was born in the North & lived in 7 different states, Hentz spent 14 years in Alabama (1834-1848) with her husband & 4 children. Most of her fiction is set in the South, the region she adopted as home & fiercely defended from northern criticism.

Born Caroline Lee Whiting in Lancaster, Massachusetts, Hentz was the youngest of John  & Orpah Whiting's 8 children. At age 17, she began teaching at the Lancaster Common School.  In 1824, Caroline married Nicholas Marcellus Hentz, a native of France, who had immigrated to America in 1816. An entomologist, novelist,  & artist, Hentz was intellectually gifted but prone to depression & uncontrollable fits of jealousy.

At the time of their marriage, Nicholas was teaching French at George Bancroft's Round Hill School in Northampton, Massachusetts. After the family's initial move to Chapel Hill, North Carolina, in 1826, Caroline began writing drama. In 1830, the Hentzes moved to Covington, Kentucky, where Nicholas served as headmaster at a female academy & where Caroline completed De Lara, which won a prize offered by Boston actor & manager William Pelby. De Lara was produced, to favorable reviews, at the Tremont Theater in Boston & the Arch Street Theater in Philadelphia. The following year, 2 more of her plays were produced, Constance of Werdenberg, or The Forest League, at the Park Theater in New York, & Lamorah, or the Western Wild, in Cincinnati, where the couple had moved in 1832, to oversee another school for girls. 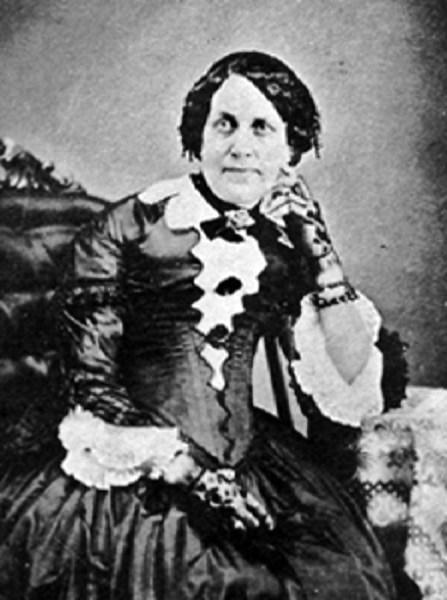 In 1834, the couple left Cincinnati following an incident in which Nicholas slapped a man who had sent Caroline a note after a party. The Hentzes moved to the frontier town of Florence, Alabama, where they established the Locust Dell Academy. During the next 14 years, the Hentzes operated girls' schools in Florence (1834-43), Tuscaloosa (1843-45),  & Tuskegee (1845-48). Caroline continued to publish, but most of her time was spent assisting her husband at school, cooking meals for the students, & tending to her own children.

In 1848, the Hentzes moved to Columbus, Georgia, to open yet another school, but Nicholas's rapidly deteriorating mental state prompted them to close the school in 1849. Two years later, the Hentzes moved to Marianna, Florida, where Caroline spent her remaining years caring for her husband & writing at a feverish pace to support her family. She rapidly became one of America's most popular writers. Between 1850 & 1853, Hentz's books sold more than 93,000 copies; & as late as 1872, the Boston Public Library listed her as one of the 3 most popular authors of the day.

The Hentzes did not live long to enjoy her success, however. When Nicholas's health grew worse, he moved to St. Andrews, Florida, to live with their daughter Julia. Caroline stayed in Marianna, traveling to St. Andrews occasionally to tend to her husband. She contracted pneumonia & died on February 11, 1856. Her husband died 9 months later, in November.  Both are buried in Marianna, Florida.

Constance of Werdenberg., or, The Forest League (play, 1832)

Human and Divine Philosophy: A Poem Written for the Erosophic Society of the University of Alabama (1844)

The Banished Son and Other Stories of the Heart (1852)

Courtship and Marriage; or, The Joys and Sorrows of American Life (1856)

The Lost Daughter and Other Stories of the Heart (1857)

Information in this posting from the Encyclopedia of Alabama
Posted by Barbara Wells Sarudy at 4:00 AM